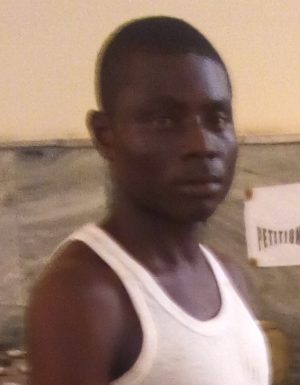 An unrepentant church thief, Williams Okonoboh Eromosele, 28 has been sentenced to seven years imprisonment with hard labour by an Igbosere magistrate court, Lagos for stealing a Huawei G73 phone valued at N70,000 from Mrs. Ihindinibu Omawunmi at the Church of Resurrection Anglican located at 1004 estate, Victoria Island, Lagos.

The convict was sentenced by magistrate Mrs. O. Otitoju after the convict pleaded guilty to the one-count charge preferred against him by the police at the Bar Beach division, Victoria Island, Lagos and the facts of the case presented by the police prosecutor, Inspector Okete Ejima.

The police at the bar Beach division, alleged that the convict had earlier been arrested in 2016 for stealing money from church offering box at a church on Musa Yar, Adua street, Victoria Island, Lagos and was charged to court. He pleaded guilty to the crime and was jailed for six months.

The Police alleged further that the convict committed the latest crime on 11 December, 2016 when he went to the Church of Resurrection Anglican at 1004 estate, Victoria Island, Lagos to attend their service. Police claimed that while the church members were praying, the convict cleverly stole the complainant’s phone and escaped.

Police stated that when the complainant observed that her phone was missing, she used another phone to call the number of her missing handset but the convict received the call and told the complainant she must pay him N10,000 before he will return the phone to her. The complainant reported the matter to the DPO in charge of bar beach division, Victoria Island, CSP Olusegun Ajamulaya, and he advised the complainant to play along and pay the money as bait into the account the convict provided.

The convict was arrested when he went to the bank to withdraw the money. During interrogation at the station, the convict confessed to the crime and said “When I came to Lagos, I could not secure any job with my OND certificate in accountancy. I went to a church on Musa Yar’ Adua street on Victoria Island to steal from church offering box and I was arrested, charged to court and jailed for six months. When I came back, the devil pushed me again to the church of resurrection Anglican, 1004 estate, Victoria Island to steal handset and I was arrested again.

The police would not have been able to arrest me the second time if I had not foolishly released my bank account to the complainant due to greed. I supposed not to release my account since I have already made up my mind to sell the phone which I later sold for N25,000 at computer village, Ikeja.”

I her ruling magistrate Otitoju sentenced the convict to 7 years imprisonment with hard labour without an option of fine.