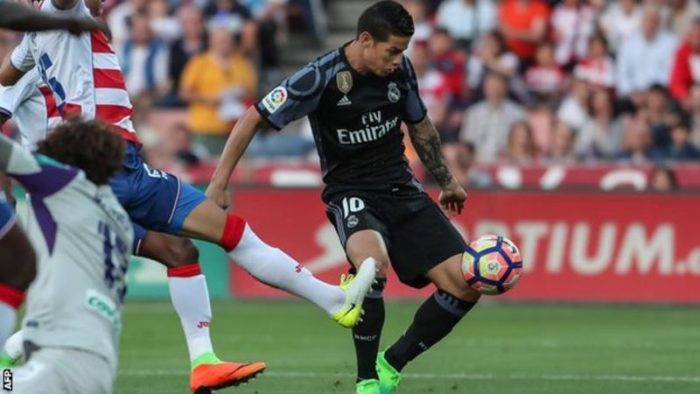 Real Madrid moved level on points with Barcelona at the top of La Liga after thrashing Tony Adams’ Granada side.

Real made nine changes and were without Cristiano Ronaldo and Gareth Bale, but took the lead within three minutes and were 4-0 up after only 35 minutes.

Alvaro Morata blasted in a third and then shot into the top corner for a fourth to seal the easy victory.

Barcelona had beaten Villarreal 4-1 to move three points clear earlier on Saturday, before Real’s dominant victory brought them back level.

Barca, who have two La Liga matches left, are top by virtue of their head-to-head record in matches against Real, but Zinedine Zidane’s side have one game in hand as they aim for their first league title in five seasons.

Zidane made nine changes from the side that won 3-0 in the first leg of their Champions League semi-final against Atletico Madrid, but were 2-0 up inside 10 minutes.

They should have scored more goals as Vazquez hit the crossbar and Casemiro missed an open goal on an easy night for the European champions.

Former England captain Adams was the surprise appointment to take charge of Granada in April, but he has now lost all five of his matches in charge, with the team only scoring one goal in that time.

They were in the bottom three when Adams became the manager, and the club’s relegation was confirmed last weekend.