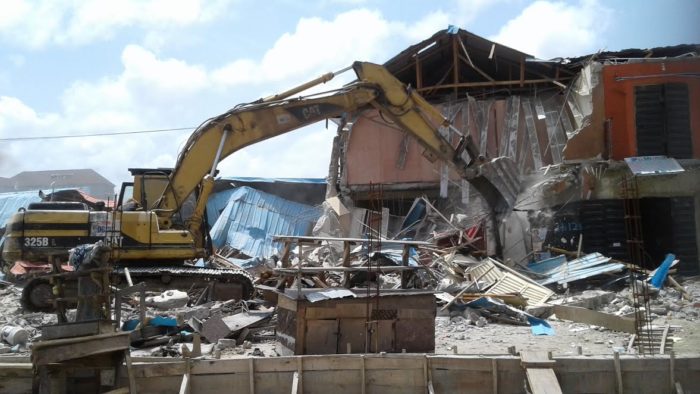 Olayinka Egbeyemi, Chairman of the Lagos State Task Force who led the operatives of the agency to carry out the demolition exercise disclosed that the over 120 illegal shops and structures constructed under high tension power cables were demolished after the government had served a 6-month demolition notice to both owners and occupiers.

He said that radiation fromhigh tension cables posed serious danger to human health and that no responsible and responsive government would put any of her citizens’ lives at risks.

Egbeyemi stated that the demolished illegal shops and structures constructed under high tension cables were eyesore as miscreants and hoodlums were freely smoking Indian hemp, including prostitution by under aged at Itedo.

He hinted that the newly introduced ‘Rent-to-Own’ housing policy scheme of Governor Akinwunmi Ambode which had more than 4,355 fully equipped housing unit spread across the State was meant to alleviate housing problem of both low/middle income earners and to equally discourage people living at any restricted areas which included under high tension cables.

He urged both owners and occupiers of shops and structures constructed under high tension cables across the State to immediately remove them as the demolition exercise would be extended to other areas.

One of the residents of the area who simply identified himself as Dr. Femi Ololade commended the government for saving the lives of both traders and residents living under high tension power cables.

Ololade, who made reference to an incident where several people died/injured when a high tension cable fell on a viewing centre in South-South zone during a football match, however, urged citizens to co-operate with the government and stop endangering their lives.

A trader, whose illegal shanties were affected, Mrs. Efe Ada from Benue State said that since the government had served them both ‘removal order’ and ‘demolition notice’ over three weeks ago, saying that she had removed her wares and relocated.

Mr. Henry Adams, a resident of one of the estate around Itedo who said apart from these people risking their lives by living/operating business activities under high tension cables, some criminal ones among them always attacked innocent citizens at night with dangerous weapons.