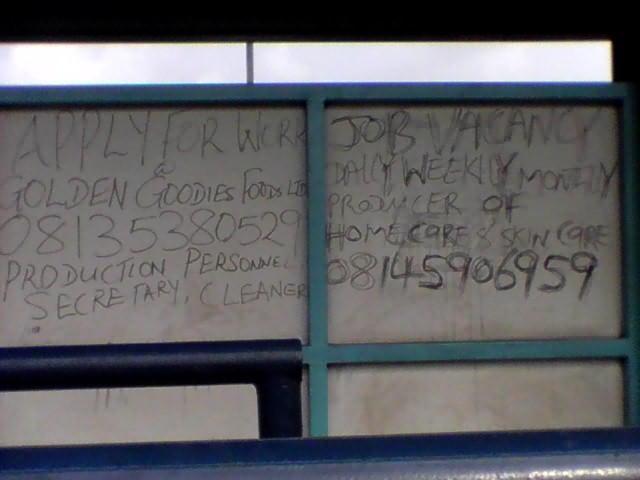 The agencies told the News Agency of Nigeria (NAN) on Sunday that the consequences of patronising advertisements placed on some of the LAMATA bus sheds and other places open spaces were calamitous.

Most of the newly upgraded LAMATA bus sheds have been defaced with phony jobs placement by unscrupulous people who are out to scam unsuspecting job seekers.

Most of the job adverts were written with black ink and most written under the cover of the night when there is less presence of security personnel.

Almost all the newly constructed LAMATA bus sheds of the Bus Rapid Transit (BRT) have the Job adverts. The sheds at CMS, Tafawa Balewa Square (TBS), Costain, Barracks, Ojota and Ketu among others were not spared.

One of the BRT Bus Ticket sellers on the employ of LAMATA, Ronke Adisa, told NAN that the adverts were often placed in the night to evade arrest by the Police.

“We come in the morning to see the job adverts written on the bus sheds. We are aware that they are not genuine and I have even warned someone copying the numbers written on the wall.

“Most of the job seekers may not be aware of it because they are desperate. Things are very hard for people, so some people want to use that avenue to exploit.

“People engaging in this act are heartless by fleecing people who are already depressed. Aside that, they are also destroying the beauty of the bus sheds.

“I implore those concerned to find a way of arresting the perpetrators of this ungodly act,’’ she said.

A LAMATA Supervisor, Tunde said that some of the phone numbers written by the fake advertisers were traceable, so, law enforcement agents could track them if they were willing to.

“Some of the phone numbers are genuine because they needed to get those that will fall prey to their scam.

“Out of curiosity, I have dialed some of the numbers and I found out that the line was active; I wonder why security agencies cannot track them down to serve as deterrent.

“I want the security agencies to be alive to their responsibility and track down those responsible for this act who know they may not be only fraudsters but kidnappers.

“For us working at the BRT stations, it is not our duty to be on the lookout for those responsible but to attend to the customers,’’ he said.

Reacting, the Head, Media and Communication, LAMATA, Mr Kolawole Ojelabi, warned the public to disregard the deceitful adverts placed on its properties by the fraudsters.

“I am appealing to the public to be guided about the fake job adverts placed on our bus sheds. We are not responsible for it and we don’t advertise jobs.

“We have plans for the spaces on the LAMATA bus sheds which we have concluded plans to concession for genuine adverts.

“As a responsible company that is out to serve people, we are aware of the fake job adverts and we have alerted security agencies about it and some arrests have been made.

“We have reported the case to the Lagos State Task Force on Environmental Offences and they are working to see that the perpetrators are brought to justice,’’ he said.

Ojelabi warned that LAMATA would not be responsible for any untoward effect on anybody patronising the fake job advertisers.

“We are not responsible for the adverts and we are using this opportunity to warn members of the public on the consequences of patronising scammers.

“Some of these adverts may not be only to defraud but they may also be to kidnap people, so, I want members of the public to be guided on these adverts on LAMATA bus sheds.

“We will continue to serve the people and see to their welfare by providing efficient and qualitative transport service,’’ he said.

An official of LASAA said that the existing laws prohibiting adverts on public spaces was still in place and anyone found contravening the law would be dealt with.

“We have existing laws that prohibit the display of such adverts. Those responsible for such adverts are contravening the law and they will be prosecuted when caught.

“LASAA will not condone such act, especially when it is not in the interest of the public. Relevant security agencies are on the heels of the perpetrators.

“The laws that prohibit such advert placements is not just for the LAMATA bus sheds but for all the public spaces we have.

“Nbody has the right to paste posters unless approved by LASAA. I also want people to be wary of paying attention to those adverts in their interest,’’ he said.

NAN reports that many residents have complained of being defrauded after apply for such jobs.

Some said that after applying, you were asked to go and pay a certain amount for interview. After paying that, the fraudsters again ask you to pay thousands to get the job which in the end would not come.