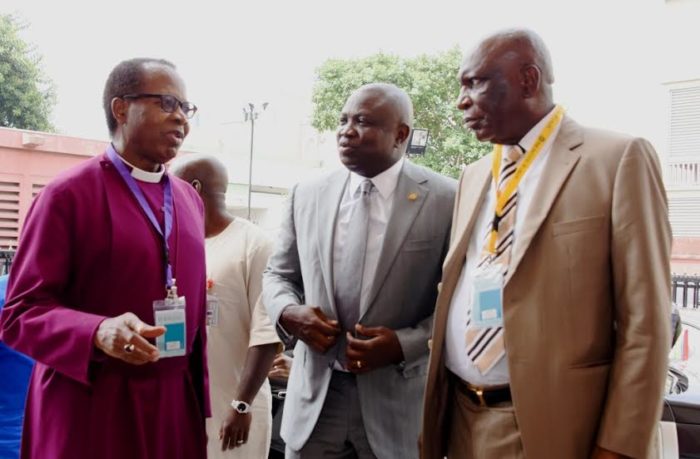 The Diocesan, Bishop of Lagos and Dean Emeritus, Church of Nigeria (Anglican Communion), Most Rev. Ephraim Ademowo has endorsed Governor Akinwunmi Ambode of Lagos State for a second term in office.

Ademowo spoke on Monday at the opening ceremony of the 33rd Synod of Diocese of Lagos, Church of Nigeria (Anglican Communion) with the theme: “Serving.”

He commended Ambode for his absolute devotion to duty and passion for the growth of the State, which according to him, had resulted in the massive developmental projects across the State.

Ademowo, who said the church would pray and support the Governor to win election again for the second term in office, said Governor Ambode as a trail blazer and innovative leader had transformed the State and taken it to an enviable height.

He said: “We have been watching with keen interest and studying the progressive administration of our Governor. As a trail blazer and innovative leader, he (Ambode) has taken our State to a greater height. Lagos State has become a reference point for other States.

“We are also proud to be identified with your laudable achievements in making Lagos a great financial hub and a reference point for other states in the country. Let me say equivocally that your predecessors did eight years in office, and I say without any doubt that you will also use eight years.

“We want to thank you for your absolute devotion to duty and life of practical humility, doggedness and total commitment to the growth and progress of Lagos State, as well as your constant efforts at making Lagos second to none and a reference point for all other States.”

Speaking at the event, Ambode mphasized the need for Nigerians to embrace selfless service to humanity, saying that such remained the essence of existence to positively impact others.

He also charged political and religious leaders to continually tow the path of service to humanity, just as he said that politics in the real sense of it should only be about selfless service to the people

Ambode, in his keynote address, described the Synod and the theme as apt and historic having coincided with the celebration of 50 years of existence of the State, which according to him, was all about celebrating those that have served and still serving the State.

According to him, “Serving be it in government, churches, mosques or wherever, is like a clarion call from God and for me, I believe that there is no way I can just give back to humanity for the greater blessings that God has endowed me than just serving and serving selflessly without any inkling of wanting to get a return back from anybody and that is what has actually propelled us to serve the people.

“We believe strongly that our calling on earth is to continually serve which is the whole essence of why we have also decided to dedicate ourselves to say that the only way we can give back to God is to serve humanity and that is what we have always been doing.

“For us that are government officials or politicians, what is it that really makes a difference? The difference is that when you are getting a feedback from people that you have made their lives easier. That is it. People don’t want any other thing from us but to make their lives easier; to make them for instance move from one point to the other easily; allow them to send their children to school and then generally make them comfortable.

“Those little things are the things that really matter to our people, and that is why we are more committed to say that on a godly template, this is a calling that we need to serve not necessarily whether we are praised or not.”

While acknowledging the fact that Christians usually like to stay away from politics, the governor said on the contrary, politics must be viewed from the point of service to the people and service without expecting any reward from people but from God.

“I want to encourage everybody to stand on that point of selflessness which is the need to do something without actually asking for a reward. If reward comes, it is just part of the package but not the package. We have been blessed, we have been enriched by God and the only thing is that wherever we find ourselves to touch other people positively, we should always want to do it. It should be service before gratification because the real blessing is the blessing of God which is beyond any other thing,” Ambode said.