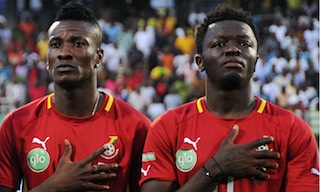 Muntari was booked for complaining about racist abuse during a match at Cagliari and was subsequently suspended, although that sanction was later lifted.

The News Agency of Nigeria (NAN) reports that the Ghanaian then walked off the field in protest in the final minutes of the game on April 30.

Infantino however told reporters on Tuesday that he intended to talk with Muntari and would give him FIFA’s “full solidarity”.

The FIFA president, who is in Bahrain for Thursday’s FIFA Congress, also said he would be discussing with Italian Football Federation President Carlo Tavecchio about the issue.

“Unfortunately (there are) idiots, (and) there are always idiots everywhere. But we have to fight them.

READ: Have Our Children Gone Mad?!

Muntari said he had complained that parts of the crowd, including a group of children, had hurled racist insults at him from the start of the game in Cagliari.

The player said the referee told him to stop talking to the crowd and ended up showing him the yellow card for dissent in the 90th minute.

The decision to punish Muntari has been widely criticised and the player himself has said FIFA and UEFA are not taking the issue of racism seriously.

Pescara , however defeated Cagliari by a lone goal in the said match.