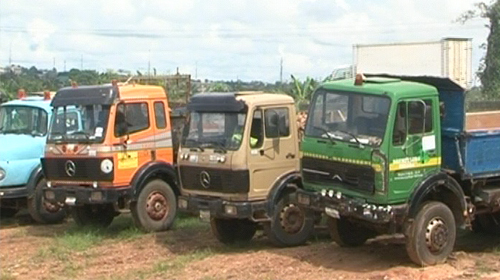 The Union of Tipper and Quarry Employers of Nigeria (UTQEN) says it is against plans by the Lagos State Government to introduce multiple haulage charges on their services.

Mr Aliu Mayungbe, the Acting National Chairman of the union, disclosed the position of the union at a media briefing in Lagos on Monday.

He said that the state Ministry of Waterfront Infrastructure Development recently attempted to impose haulage levies on trucks moving sands from dredging sites.

Mayungbe described the plan as unlawful and a disincentive to businesses in the state.

The union chairman said that his members had been paying the said charge to government regularly through the Ministry of Transportation.

He said that attempts by the Ministry of Waterfront Infrastructure Development to use collection agents to collect the charges from truck drivers would amount to multiple charges.

According to him, the union maintains a position of neutrality and refuse to be entangled in the payment dispute between the government and the Dredgers Association of Nigeria.

“Officials from the Ministry of Waterfront Infrastructure Development met with our members to solicit support for the introduction of haulage fees on our activities.

“The collection process was for truck drivers to obtain N500 from dredgers on each truckload of sand moved from their site and pay to the ministry’s collection agent positioned at the gate of the site.

“We resisted the fees because our activities are not regulated by Ministry of Waterfront and Infrastructure Development, but by Ministry of Transportation.

“Moreso, the dredgers that we are been pitched against are members of our union and every increase in charges by government impacts negatively on our operating costs and reduces job creation opportunities,” he said.

Mr Abimbola Odusanya, the Public Relations Officer of the Lagos State Chapter of the union, said that officials of the ministry threatened to imprison truck drivers who refused to boycott sites of dredgers that did not comply with the payment.

“Obeying such order will hinder our business activities and relationship with dredgers.

“We instructed our members to resist efforts of government officials that tried to collect the payment from them.

“The issue of multiple charges is killing businesses, making Lagos unfriendly to entrepreneurs and a major factor for the increasing cost of doing business in the country,” he said.

Mr Batare Akpomejero, President, Dredgers Association of Nigeria, said that a judgement of Federal High Court had restrained the state from seeking to control commercial activities of dredgers.

“Due to multiple taxations on our activities from federal and state agencies, the court had ruled that the National Inland Waterways Authority (NIWA) and NIMASA were the proper and lawful agencies with authority in matters relating to the commercial activities for dredgers.

“To now have officials of the state government lobbying UTQEN through the pretence of introducing unauthorised charges to collect fees that the court restrained them from obtaining from us is unlawful,” he said.

Akpomejero said that multiple taxations was inimical to business expansion and growth, reduced profit, worsened unemployment rate and discouraged investments in the country.

Tags:   Union of Tipper and Quarry Employers of Nigeria (UTQEN)