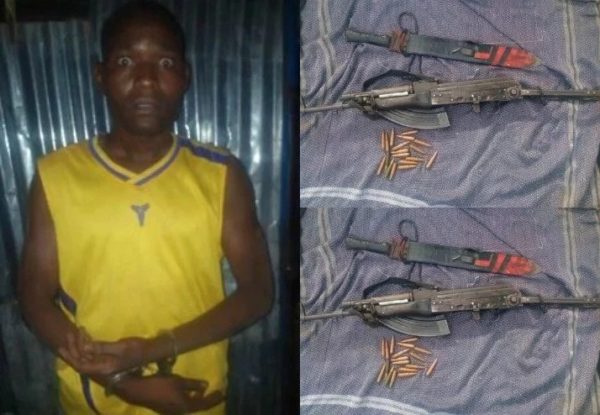 Commander Pepper and his weapons after his arrest by troops

The Nigerian Army says it has arrested a top Boko Haram commander notorious for terror activities in Yobe State and environs.

According to the statement, Adamu was arrested on Sunday, May 14 by the Troops of 233 Battalion, 27 Task Force Brigade, of the Nigerian army, assisted by local vigilantes.

Preliminary investigation shows that the suspected terrorist hailed from Yerimara village, Potiskum LGA and that he has participated in carrying out attacks and other terrorists activities in the north east. Investigation is still ongoing.

In a related development, combined troops of 231and 331 Battalions foiled an armed robbery attempt at Chanchara village, Shani LGA. They recovered an AK-47 rifle, machetes and ammunition.

Meanwhile, eleven farmers have been killed in Amarwa village in Konduga LGA, after Boko Haram insurgents reportedly stormed the village in search of food.

The village, which was about 16 kilometers away from Maiduguri metropolis was very close to Alau Dam which was heavily guarded but no help came from there during the attack.