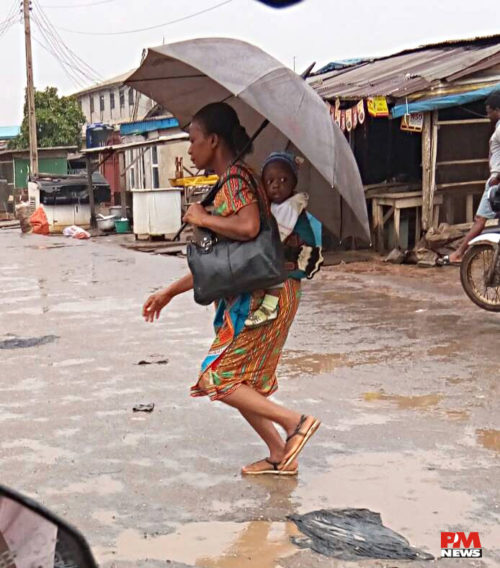 A woman running away from rain

The Nigerian Meteorological Agency (NiMet) has predicted cloudy morning conditions over Central States of the country on Sunday.

It also predicted that there would be prospects of localised thunderstorms over Southern Niger during the period.

According to the forecast the region will have day and night temperatures of 26 to 31 and 17 to 23 degrees Celsius respectively during the period.

The agency predicted that Southern States would experience cloudy morning over the inland cities and the southeast coast with morning rains over the southwest coast.

It also predicted rains over the coastal cities and chances of thunderstorms over the inland cities later in the day with day and night temperatures of 28 to 33 and 22 to 25 degrees Celsius respectively.

According to NiMet, Northern States will experience cloudy conditions with chances of thunderstorms over Southern Sokoto, Kebbi and Yelwa in the morning hours.

“Later in the day, thunderstorms are anticipated over Sokoto, Gusau, Katsina, Kano, Dutse, Damaturu, Potiskum, Gombe and Maiduguri with day and night temperatures of 30 to 36 and 24 to 25 decrees Celsius respectively.

“Most parts of the country are expected to be cloudy in the morning with prospects of thunderstorms occurrence later in the day,” NiMet predicted.