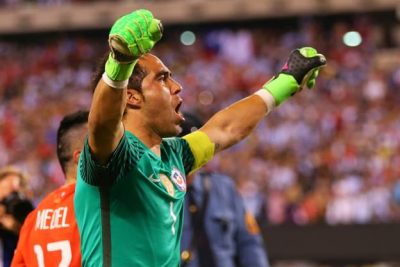 Chile goalkeeper Claudio Bravo saved three successive penalty kicks to give them a 3-0 shootout win over Portugal after their 2017 FIFA Confederations Cup semi-final match had ended goalless on Wednesday.

That meant that Portugal captain Cristiano Ronaldo, who usually goes last in the shootout, did not get to take a kick.

The result was justice for Chile after they hit the woodwork with two successive shots in the dying seconds of extra time.

There was also controversy shortly before that when Chile winger Alexis Sanchez went down in the box under a Jose Fonte tackle.

But the referee did not consult the Video Assistant Referees (VARs), even though contact seemed to be made.

Bravo has been criticised for his club form with Manchester City this season but he was Chile’s hero alongside Arturo Vidal who gave another inspired and tireless performance in midfield.

Chile will face either Germany or Mexico, who meet on Thursday, in Sunday’s final in St Petersburg to close an exhausting two weeks.

Wednesday’s game only came to life in exasperating patches.

The first six minutes promised a feast as Chile forward Eduardo Vargas had an excellent chance blocked by Rui Patricio.

After this, Andre Silva’s close-range effort was smothered by Bravo at the other end after he was set up by Ronaldo.

Vargas provided the high point of the second half when he flicked the ball up with his back to goal and then fired in a brilliant overhead shot which Rui Patricio saved.

One effort was parried by Bravo, and then he sent a long-range free kick high and wide.

Then he had a shot deflected wide and later missed the target with a header from Cedric Soares’ cross.

Sanchez was largely kept under wraps and Chile’s record goalscorer did not have his first sniff of goal until early in extra time.