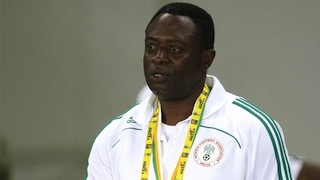 Chairman of Edo Football Association, Frank Ilaboya, has said the late Super Eagles Coach, Shuaibu Amodu’s contributions to the development of sports has placed Nigeria in the limelight among the comity of nations.

Ilaboya who spoke at an event marking the one year anniversary of Amodu’s death at the Samuel Ogbemudia Stadium in Benin City, poured encomium on him.

Delivering a lecture entitled: “Life and times of late Coach Shuaibu Eshiogieme Amodu,” the Guest Speaker, Coach Alabi Asien, said Amodu was a hard-working man with a lot of vision, and that he did not believe that success in life was achieve by chance or luck.

“He was a hard working man with a lot of vision. He did not believe that success was achieved by chance or luck. He worked so hard as if prayers do not matter and yet, he prayed so much a if hard work was not necessary. These were the concepts that informed all of his work success. He was a huge success,” he said.

Asien noted that Amodu who became the coach of the Super Eagles in 2002 as the first indigenous coach to qualify Nigeria for the World Cup for two consecutive times, also helped to promote grassroots football in Edo State after he was relieved of his national assignment in 2010.

“When he was relieved of his national assignment in 2010, the Edo State governor then, Comrade Aliu Oshiomhole gave him the soft landing he needed. He was told to fashion a grassroots football developmental program for youths and to start its operation.

“He quickly brought his administrative and organizational know-how to play. He held top level discussions with the Ministry of Education and asked for the revamp of school sports.

“He held meetings with all the Chairmen of the 18 local government councils in Edo State and secured their approval and support. He made sure that the State FA gave him the needed backing and aid in his operation,” he said.

The former Bendel Insurance Coach said the late Super Eagles Coach sterling qualities endeared him to his teeming admirers and friends within and outside the shore.

He noted that the sudden death of the coach had provoked several key questions that have been left unanswered, but that one thing that was cleared was that both the Federal and State governments owed him some huge sum of money and that Amodu did not have enough money to treat himself as at the time he died.