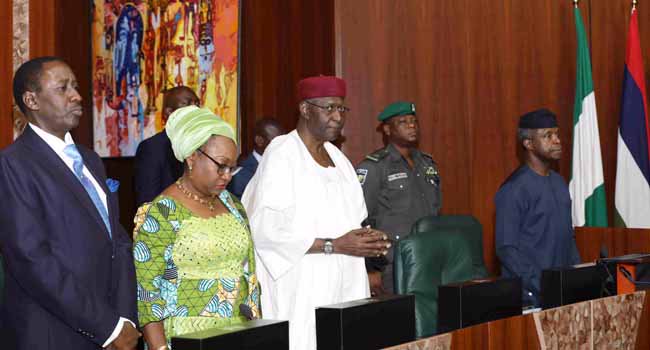 Members of the Federal Executive Council (FEC) observing a minute silence in honour of the late Dr. Maitama Sule on Wednesday

Members of the Federal Executive Council on Wednesday observed one minute silence in honour of the late elder statesman, Maitama Sule.

The Acting President, Professor Yemi Osinbajo who just returned from the 29th African Union summit in Addis Ababa, presided over the meeting.

He reiterated the message of unity and indivisibility of Nigeria which he said the late patriarch preached.

Furthermore, he described the late orator and former minister in the first republic as patriotic, and a committed nationalist whose interventions made a huge difference in the nation.

He also noted that the Federal Government was represented at the funeral by a delegation led by the Chief Of Staff, Abba Kyari.

Dr Sule died on Monday in a hospital in Egypt while undergoing treatment for an illness. He was buried on Tuesday in accordance with Islamic rites in Kano State.