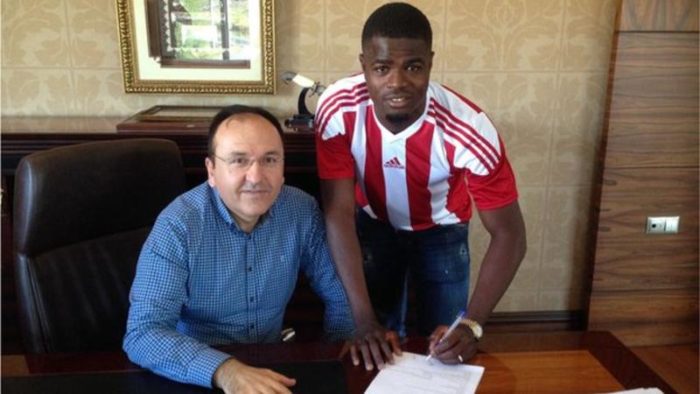 Left-back Echiejile, 29, has joined Sivasspor from French side Monaco on a season-long loan.

The move to Turkey is Echiejile’s third loan switch since joining Monaco from Portuguese club Braga in January 2014.

He has previously played on loan at Belgian club Standard Liege and Spanish side Sporting Gijon.

Capped 51 times by Nigeria, Echiejile helped the Super Eagles to their third African title in 2013 and played at the 2010 World Cup in South Africa.

Troost-Ekong, who joined Gent in July 2015, moves to Turkey in search of regular first-team football.

He played the 2015/16 season on loan at Norwegian club FK Haugesund, but only made eight appearances for Gent last season.

He started his career with the Tottenham Hotspur youth side before returning to the Netherlands to join Groningen in 2013 and played on loan at Dordrecht.

He was a former Netherlands youth international before switching allegiances to represent the country of his father at senior level.

Troost-Ekong won Olympic football bronze with Nigeria at the 2016 Rio Games and has 10 caps for the Super Eagles.

Ezekiel, who began his professional career at Belgian side Standard Liege, is delighted with his return to European football.

“I thank Konyaspor for the opportunity to come here and I hope to make a significant contribution,” Ezeikel, who scored 38 goals in 104 games for Standard Liege, told BBC Sport.

Despite sealing a big-money move to Qatar in 2014, the striker had previously returned to Belgium for loan spells with former club Standard Liege and giants Anderlecht.

Ezeikel made his debut and lone appearance for Nigeria in a friendly against Mexico in March 2014.