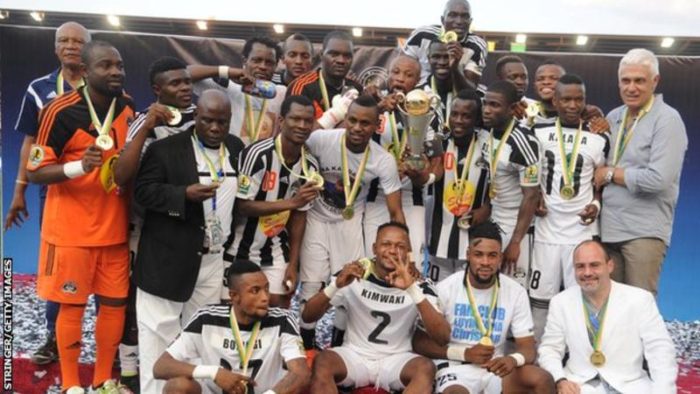 Holders TP Mazembe of the Democratic Republic of Congo and South Africa’s SuperSport United booked their place in the quarter-finals of the African Confederation Cup on Saturday with victories in their final Group D matches.

Mazembe were 2-1 winners over Horoya of Guinea in Lubumbashi to finish top of the standings as SuperSport defeated Gabon’s Mounana 4-1 in Pretoria to go through as group runners-up.

Only the top two from each of the four groups progress to the last eight.

Mazembe’s match against Horoya was a top-of-the-table clash with both sides locked on nine points at the start of the day – two more than SuperSport United.

Deo Kanda gave defending champions Mazembe an early lead with a goal in the 14th minute, but that lead was to last only 23 minutes after Sebe Baffour hit an equaliser.

It was left to Nathan Sinkala to strike late in the second half to give Mazembe a 2-1 win and secure their place in the last eight as group winners.

In Pretoria, Bradley Grobler opened the scoring for SuperSport United in the 13th minute.

Thabo Mnyamane added another and a Jeremy Brockie brace made it 4-0 to the hosts before the break.

The Gabonese side did manage to get a consolation goal in the second half through Mensah.

On Friday, Club Africain of Tunisia and FUS Rabat of Morocco booked their place in the quarter-finals after a dramatic climax to Group A.

Manoubi Haddad scored twice and Saber Khalifa and Moataz Zemzemi once for Group A leaders Africain.

The Moroccans came second having won 3-0 at home and lost 3-1 away to the Ugandans.

Africain and FUS must wait until Saturday night to discover who they will meet in the quarter-finals, but both opponents will be fellow north African clubs.

Africain meet the Group B runners-up and 2010 Confederation Cup title-holders FUS the winners in two-legged ties scheduled for September.