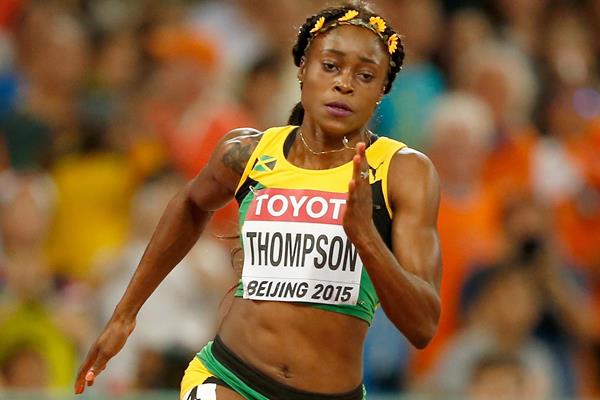 Olympic champion Elaine Thompson showed that she remains the woman to beat over 100 meters in the world championships next month when she scorched to victory on the same London Olympic stadium track on Sunday despite running in trainers.

The star-studded Diamond League meeting gave the cream of athletics a chance to test the facilities they will experience during the Aug. 4-13 world championships and organizers ensured there was a noisy finale when local hero Mo Farah closed out proceedings with an easy win over 3,000 meters.

Jamaica’s Thompson produced a late surge to get past regular rival Dafne Schippers to triumph in 10.94 seconds, impressive into a headwind of 1.4 meters and even more so as she was running in cushioned trainers to prevent injury.

The wall of noise that brought Farah home for double distance gold in the stadium four years ago was a little more muted on Sunday but the half-full arena was still happy enough to watch him dominate a 3,000m lacking any real African threat.

Farah duly delivered with a 55-second last lap to come home in 7:35.15, fine-tuning his build-up for his farewell appearance next month.

Evergreen Allyson Felix will also look forward to defending her 400m title and showed she is easing back into top form when she won on Sunday in 49.65 seconds, the fastest time in the world this year and in her first Diamond League race of the season.

At the other end of his career, compatriot Fred Kerley picked a great stage for his first outing as a professional athlete. Although he was beaten by U.S. champion Ameer Webb over 200 meters he will take heart from the performance when he returns to race in the 400m at the worlds.

Kerley, who has been blazing a record-breaking one-lap trail through his college career, clocked a personal best 20.24 behind Webb’s 20.13.

Another nicely-timed world lead was delivered by injury-ravaged Nijel Amos, silver medalist on this track behind world-record breaking David Rudisha in the 2012 Olympics, as the Botswanan won a high-quality 800 in 1:43.18.

Kendra Harrison set the current women’s 100m hurdles world record of 12.20 at this meeting last year – a minor consolation for missing out on the Olympics – and she made it 21 wins in a row since with an impressive time of 12.39 seconds.

Just as happy with her second place in 12.48, her fastest for four years, was Australian 2012 Olympic champion Sally Pearson, who has overcome a series of injuries to get back into the mix just in time.