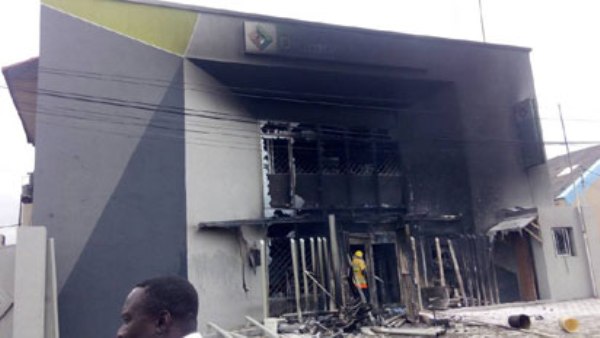 The Management of Diamond Bank Plc has shut its Creek Road, Apapa, Lagos branch following a mob attack on the branch on Wednesday.

In a statement, Head, Corporate Communications, Chioma Afe confirmed that there was a fire incident as a result of the mob action.

Afe stated that the bank was set ablaze by an angry mob after a policeman allegedly shot dead a trailer driver outside the bank premises.

“We had a fire incident at our branch office on Creek Road, Apapa which severely damaged branch infrastructure as a result of mob action. While the situation is under control, we are working with the Nigeria Police Force and other law enforcement agencies to investigate actions leading to the fire incident. While these investigations are ongoing, the branch will be closed to customers for their safety and to allow for completion of all repairs”.

“We will continue to provide updates to our customers via our social media platforms and print media and we urge those customers in the Apapa area to use our broad range of alternate delivery channels like the Diamond Mobile app, Diamond Online, Diamond ATMs and Contact Centre to carry out their transactions.

”For those who need to visit a branch location, our closest branches to the Apapa area are situated in Ebute Metta, 1, Market Street, Oyingbo, Opposite Bhojsons Ltd Yaba, Iddo Market Mini, Iddo Ultramodern Market, Surulere, 31, Bode Thomas Street and Amuwo Odofin, Plot Nos 21, 22 & 23 Opposite Abc Transport Terminal are available to process their requests,” concludes the statement.