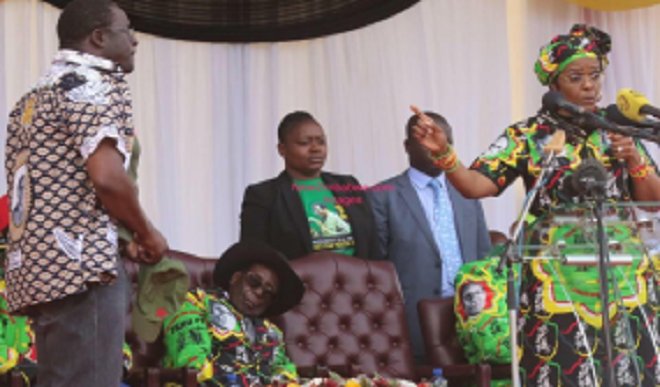 Robert Mugabe sleeping at the rally

For the umpteenth time, President Robert Mugabe of Zimbabwe was caught sleeping by the camera at a political campaign rally.

This is not the first time the 93-year old president would be caught napping during important political meetings, but he has often been defended by his loyal wife and others who always paint a different picture.

Another instance of Mugabe sleeping during an important function occurred last Saturday during a campaign rally. As President Robert Mugabe’s wife, Grace took presidential spokesperson George Charamba down a peg or two before a stunned Zanu PF crowd and a television audience Saturday, Mugabe was pictured enjoying an afternoon snooze.

Grace was shouting the information ministry permanent secretary down for allegedly influencing the State media to ignore her philanthropic work while reserving good coverage for others.

It could have been double embarrassment for President Mugabe’s most fierce defender who has previously denied claims the Zimbabwean leader often dozed off during summits.

In attempts to give a spin to the claims, Charamba has said President Mugabe’s apparent sleepy postures would in fact be an attempt by his boss to avoid direct light onto his tired eyes.

But Saturday was one of the chilliest days of the current winter period with neither sunlight nor artificial light at the time to pin the blame on.

With Grace evidently enjoying with gay abandon the misery she was pouring on Charamba, her husband may have also lost an invaluable aide who would usually nudge him back into alertness each time sleep got the better of him.

President Mugabe may also have been the inadvertent target of loyalists after they took turns while chanting party slogans on the podium to repeat the new slogan, “pasi nevanorota vachitonga (down with those who dream of themselves as the country’s rulers)”.

The slogan was apparently coined for Vice President Emmerson Mnangagwa who is angling to succeed the 93-year-old leader.