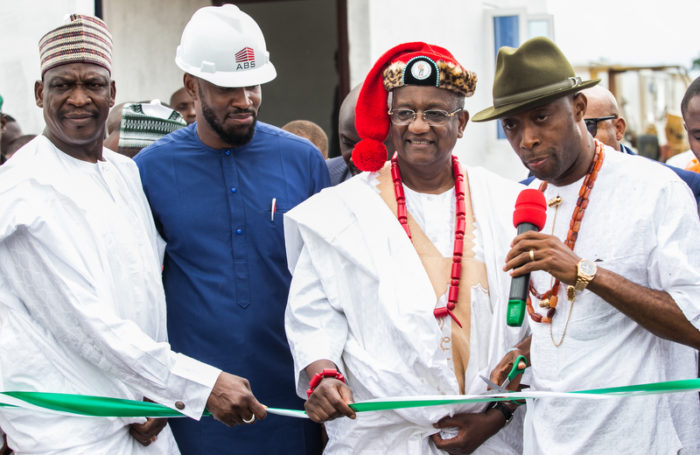 The estate named Oriental Village, Mbo when completed will have a solar-powered electrification system, a school, clinic, a shopping centre and will be given freely to beneficiaries.

The project is being built and funded exclusively by Oriental Energy Resources Limited and the Muhammadu Indimi Foundation as a legacy project for Oriental Energy’s host communities.

This was revealed by the Executive Chairman of the company, Alhaji Muhammadu Indimi in his speech at the groundbreaking ceremony in Enwang.

According to the chairman, the Oriental Village is clear manifestation of the company’s commitment to sustainable development of its host communities.

“The housing initiative we have commissioned will leverage innovative housing technology to provide accommodation to 100 families in Mbo Local Government Area. There will be 100 units of one-bedroom flats which will sit on a 2.5 hectare of land graciously provided by the good people of Eyo-Ukut and facilitated by the Enwang Council of Chiefs, led by our respected clan head,” he said.

He further stated that the company is dedicated to social inclusion and that its approach is to grow alongside its communities in a socially responsible manner while operating in an environment that fosters value creation and sustainable development.

Indimi revealed that “Since we commenced operation, we have created an annual scholarship fund which has seen over 470 scholarships awarded since 2009, at post primary and tertiary levels to recipients in Akwa Ibom. We have also trained over 270 youth at seven Skill Acquisition Centres in Uyo, Oron, Eket and Ewang in Akwa Ibom state, all of whom received starter packs and start-up funds for their businesses.

“In addition, we have begun to engage other operators in Akwa Ibom State to create a sustained funding program of sponsorship for the University of Uyo’s Department of Petroleum and Chemical Engineering. We have also trained 500 women on business and financial literacy and given out seed funds to 200 community women to start up small scale businesses.

“OERL continues to carry out periodic free medical outreaches with Doctors, Nurses and medical personnel to our host communities with over 20,000 persons having benefitted cumulatively. We have also empowered the local fishermen by providing five modern fishing boats, nets and other equipment to enhance their productivity and economic growth “.

Indimi also commended the host communities, the government and people of Akwa Ibom State led by the visionary governor, Deacon Udom Gabriel Emmanuel for their tremendous support and cooperation.

“Today, as we break ground on this momentous project, I am indeed optimistic about the future. A future where we continue to collaborate as partners and stakeholders for the development of our communities”.

Udom Emmanuel, Governor of Akwa Ibom, in his keynote address said: “My government and people have followed with keen interest, the exploits of Oriental Energy Resources Limited in the Nigerian Petroleum Sector.Some of these include the successful development of Ebok oil field and in the Oil Mining Lease (OML) 115. This event, the ground-breaking ceremony of the Oriental Village in Enwang, Mbo local government Area is one of such spectacular achievements.”

The Mbo Local Government Chairman, Mfon Bassey Edet also added: “I am very excited that this project is being executed during my tenure. A modern estate like this is a laudable project that other companies should emulate. We are grateful to Oriental Energy for coming up with this innovative project.”