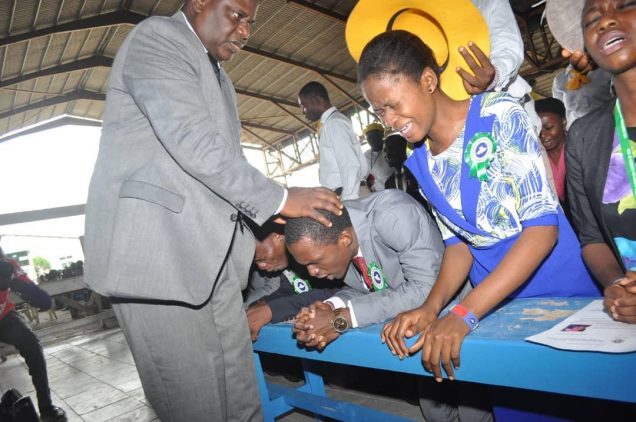 Bayo Lawal, Vice President of Redeem Christian Fellowship (RCF), Kwara State University chapter was among the 90 students ordained as deacons and deaconesses by Redeemed Christian Church of God (RCCG) at the 65th Annual Convention which kicked off at the Redemption Camp on Sunday with the theme “Halleluyah”.

Describing the 2017 convention as mighty and prophetic one, never seen before, Enoch Adeboye, the General Overseer of the Church, had in July promised participants some of the first things ‘God said to man.’

God said to man, “he is blessed, he will be fruitful, multiply and have dominion.”

Mr Adeboye prophesised that participants who have challenges in those areas of life will be relieved of them at the convention.

The church’s National Overseer, Joseph Obayemi, presented the candidates to Mr Adeboye for ordination to help in the growth of the church and in service to God.

Explaining the process of ordination, Mr. Adeboye said, “In the Redeemed Christian Church of God ordination is done by laying of hands, proclamation, and prayers.”

Reacting, Lawal said the ordinance has helped his religious life intensifying that his commitment to God has strengthened and that the propagation of Christianity as a church minister is a dream come true for him.

“As an ordained deacon, I want to empower people, draw many to God, encourage them to consistently stay true to God, and also being a role model for this generation and the next to come, he said.

He further stressed that being a Christian comes with so many responsibilities because Jesus has commanded Christians to go into the world and preach the gospel to everyone. So, this role comes with great responsibilities, as I’m expected to lead people in the way of the lord as it is established in John 15 that God will cut the unfruitful out as a branch in His vineyard.

I dedicate this to God and to the governing council of RCCG and especially to pastor E.A. Adeboye who has found me and other persons worthy of this ordinance.