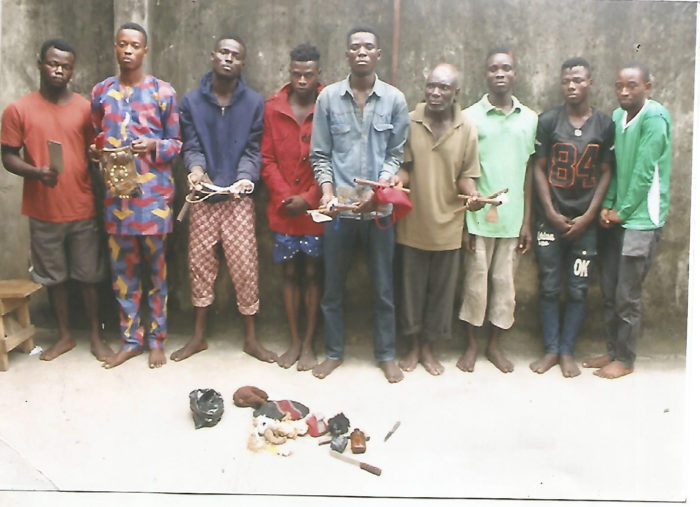 Nine suspected fleeing cultists have been arrested by the police at Iperu Remo Town and Isara Area of Ogun State, South West Nigeria.

The suspects were said to have confessed to being members of Eiye Confraternity.

The arrest of the suspects, according to a police source was made possible by a crack team led by DSP Olaniyi Festus in charge of strike force unit 1 of the Federal Special Anti-Roberry Squad (FSARS), Adeniji Adele Road, Lagos, following a directive by the DCP in charge of FSARS, Mr. Ibrahim Kaoje.

The arrested suspects, according to the police had escaped arrest when FSARS operatives swooped on their base at Iperu Remo Town in Ogun State about a month ago and arrested two suspects identified as Adeyinka Adekunle and Simon Adesola a.k.a Solar.

Police alleged that the two suspects allegedly confessed to the crime that they were members of Eiye Cult group led by Taiwo Oluwaseun Boyejo a.k.a Omo Ile Aje and they led the police to arrest the nine suspects at their various hideout at Iperu Remo Town and Isara Area of Ogun State.

Items recovered from the arrested suspects, according to the police, included eight shot battle axe, two knives, one hammer, one cutlass and charms.

During investigation, Adenuga allegedly confessed to the crime.