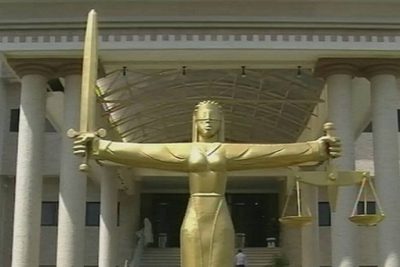 An Ebute Meta Chief Magistrates’ Court, Lagos, south west Nigeria on Friday, ordered that the Baale of Osoroko community, in Ibeju-lekki area of Lagos State, Olusegun Oyiri, 61, and three others, be remanded in prison custody, for allegedly killing and burying a Police Inspector.

The four defendants were alleged to have on November 29, 2016, at Osokoro community in Ebute-Lekki, Lagos, conspired and unlawful killed Police Inspector Sunday Musa, and buried him in a shallow grave.

They were also alleged to have stolen his service rifle, AK 47, two magazines and 30 rounds of 7.62 live ammunition.

The court presided over by Magistrate A. O. Salawu (Mrs.) ordered the four defendants to be remanded in Prison custody, while granting an application by Emmanuel Eze, from the State Criminal Investigation and Intelligence Department (SCIID).

Eze told the court that the application was asking for the remand order pursuant to section 264(1) and (2) of Administration of Criminal Laws of Lagos State, 2015.

The plea of the accused persons were not taken.

He also told the court that the Baale never participated in the killing of the policeman and that he was on administrative bail granted him by the Police.

However, the presiding Magistrate, Mrs. A.O. Salawu ordered that the three defendants, except the Baale, be remanded in Ikoyi Prison pending legal advice from the office of the State Director of Public Prosecutions (DPPs).

She adjourned the case till August 31 for ruling in the bail application of Oyiri, the community leader, while September 21 was fixed for legal advice in the case of the other three accused persons .