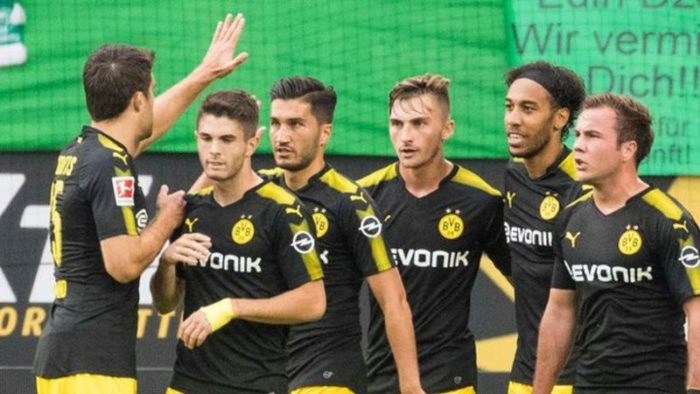 Mario Gotze set up the opening goal in his first start in nine months as Borussia Dortmund began the Bundesliga season with a stylish win at Wolfsburg.

Germany attacking midfielder Gotze had not played since being ruled out earlier this year for an indefinite time period because of “metabolic disturbances”, but impressed as he played for just over an hour.

The 25-year-old made an early impact, teeing up American teenager Christian Pulisic who fired in from the edge of the box.

Dortmund, without France winger Ousmane Dembele amid interest from Barcelona, doubled their lead when centre-back Marc Bartra popped up on the left edge of Wolfsburg’s penalty area, beautifully bending into the far top corner.

Eighteen-year-old Pulisic, who has been linked with a move to Liverpool, turned provider after the break when he drilled across the home goal for striker Pierre-Emerick Aubameyang to convert at the far post.

It was the perfect start for new manager Peter Bosz, who left Ajax to replace Thomas Tuchel earlier this summer.

Elsewhere, Hamburg striker Nicolai Muller scored the winner in a 1-0 victory over Augsburg – but was then substituted after injuring himself when he tripped over the corner flag while celebrating.

Hannover, who were promoted alongside Stuttgart last season, marked their top-flight return with a 1-0 win at Mainz.