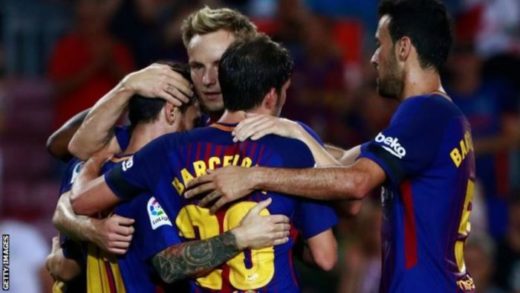 Barcelona made a winning start to their La Liga campaign by defeating Real Betis on an emotional night at the Nou Camp.

The Spanish giants were playing for the first time since the terror attack in the city on Thursday and both teams paid their respects to the victims with a minute’s silence before kick off.

Barcelona took the lead in the game when Alin Tosca deflected Gerard Deulofeu’s cross into his own net.

Sergi Roberto then swept in a second.

It was a much-needed result for Barcelona after a difficult start to their season. Forward Neymar left the club to join Paris St-Germain in the summer before they were beaten 5-1 on aggregate by rivals Real Madrid in the Spanish Super Cup.

Lionel Messi, the focal point of the Barcelona forward line in the absence of Neymar and the injured Luis Suarez, hit the woodwork three times as he pursued his 350th La Liga goal.

But it was former Everton forward Deulofeu who made the difference, providing the assist for Roberto’s goal after his cross had led to the opener, BBC Sports reports.