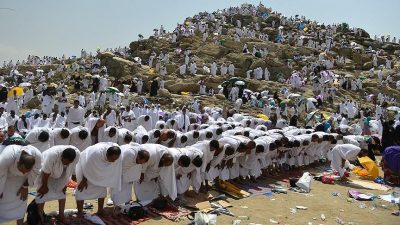 This is contained in a statement signed by Gov. Aminu Tambuwal’s Special Adviser on Media and Public Relations, Malam Imam Imam, and made available to the News Agency of Nigeria (NAN) on Tuesday in Sokoto.

The statement said the special prayer, which was performed at the Grand Mosque in Mecca, also had in attendance pilgrims from other states who expressed pleasure at the effort of the Sokoto delegation.

“Our pilgrims joined other well-wishers during a special prayer session for the health of the President, stability of their state as well as peaceful coexistence of the nation,” the statement said.

The statement also added that the prayer session was led by Islamic scholars, who, expressed happiness over the return of the President from his medical vacation in the UK.

“The pilgrims expressed delight at the safe return of the President, and also prayed to Allah to give him strength to execute the mandate to develop the country.

“As for Sokoto State, the pilgrims and their officials commended Gov. Aminu Tambuwal and the state Pilgrims Welfare Agency, for the arrangements put in place to ensure a smooth and successful Hajj exercise,’’ the statement added.