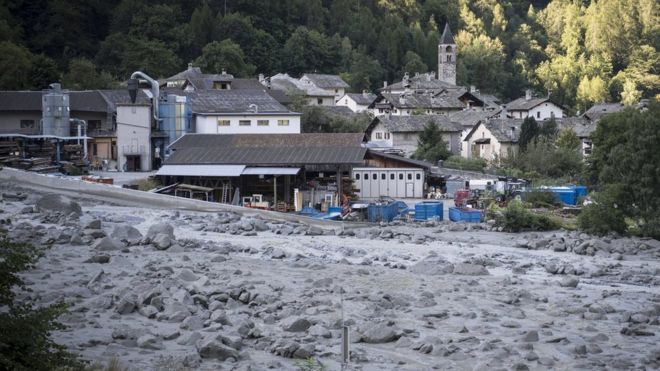 Villages were evacuated after the landslide

Eight people are missing following a landslide in an alpine valley in south-eastern Switzerland, police say.

The landslide on Wednesday forced the evacuation of some villages in the Val Bondasca region, officials said.

German, Austrian and Swiss citizens are among those missing, Graubünden cantonal police said in a statement.

Pictures from the scene show rocks and debris scattered across roads. A helicopter is helping in the search and rescue operation, Swiss media report.

The landslide happened at about 09:30 local time (07:30 GMT) on Wednesday when boulders and earth cascaded down the side of the Piz Cengalo mountain, the Engadiner Post newspaper reported.

The village of Bondo, near the Italian border, was among hamlets in the path of the debris and about 100 people from there were evacuated, it said. Several farm buildings were destroyed and pictures show the flow right up against homes and blocking roads.

Residents are not allowed to return until further notice, the report added.

Hikers staying in mountain huts were airlifted to safety.

Police said that despite searches eight people were unaccounted for, six of whom had been reported missing by relatives.