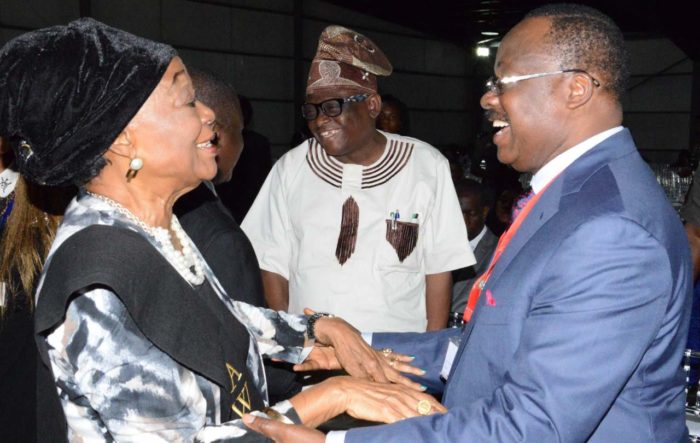 Ajimobi at the event

As the debate for the restructuring of the country rages, Oyo State Governor, Senator Abiola Ajimobi, has called on the Federal Government to surrender the control and management of revenue accruing from natural resources to the owner states.

The governor canvassed the position as a panelist at the ongoing 57th Annual General Conference of the Nigerian Bar Association, where he presented a paper on “Debt as a drag on institution building,” in Lagos, on Wednesday.

Other speakers at the session were the Ghanaian Minister of Finance, Mr. Ken Ofori-Atta, and the Director-General, Debt Management Office, DMO, Mrs. Patience Oniha.

In what he described as a warped federalism that favoured the FG, the governor said that the states had continued to rely heavily on the centre for the bulk of the revenue to manage its affairs.

Ajimobi said, “There is an urgent need for fiscal independence for the states if we are to be free from going to Abuja monthly cap in hand to collect allocations. Let the states control some of the resources in their domain. Let the FG unbundle some of the responsibilities in its care. Some of the items currently on the exclusive legislative list should be moved to the concurrent list. For, instance, there is no reason why the FG should be giving licenses to miners in my state. We need to revisit this arrangement so that the states will not perpetually be at the mercy of the FG. The practice is stifling the development of the states. Financial independence will reduce the rate at which states obtain loans”.

As one of the African countries touted as having the potential of becoming an economic power house, Ajimobi stressed that Nigeria must look deeply at its debt management and servicing tactics to attain the status.

He identified administrative corruption by political leaders and collaborating civil servants, through diversion of loans meant for designated projects to other projects that would cater for their narrow interests, as a major factor responsible for the country’s rising debt profile.

The governor recommended the strengthening of institutional capacity, adherence to terms and conditionality of loans, attitudinal change and project financing monitoring as the panacea to the country’s high debt profile.

The governor said, “There is a positive correlation between meaningful economic growth and strict financial discipline. The reverse may be the case when debt servicing, whether external or domestic, becomes burdensome due to mismanagement of loans. Nigeria, among some other African countries, has been noted to be among the world growing economies and as such we cannot but take loans, but we must look at the diligent approach and management of our debt. It is no longer news that institutional corruption perpetuated by politicians and colluding civil servants has over time caused the country a lot of problems, as the two divert loans meant for particular projects to other projects they believe their individual purposes would be served”.

In his presentation, Ghana’s Finance Minister recalled his country’s financial journey post-2007 debt forgiveness by creditors; a period during which he said Ghana witnessed economic growth and turnaround.

Ofori-Atta blamed what he described as the unfortunate misappropriation of the country’s loans over time for its retrogression to 73 per cent debt to Gross Domestic Product ratio and a decline in growth rate.

Since the incumbent administration took over the reins of leadership about eight months ago, he said that Ghana had put in place stringent measures to regulate its debt through the creation of debt management office.

In a similar vein, he said that the country also approved deficit target by the legislature and criminalised any attempt by politicians or civil servants to undertake projects outside budgetary provisions.

The minister said, “Ghana has criminalised any attempt by civil servants and politicians to execute projects outside the budget. We have created the DMO office and gave legislative approval to deficit target, among other measures to stabilise the debt rise and grow our economy. The most important aspect of the measures is to grow revenue and reduce taxes by 40 per cent for the people to get back to business. There is a lot of optimism and we are having a negative to a positive outlook”.