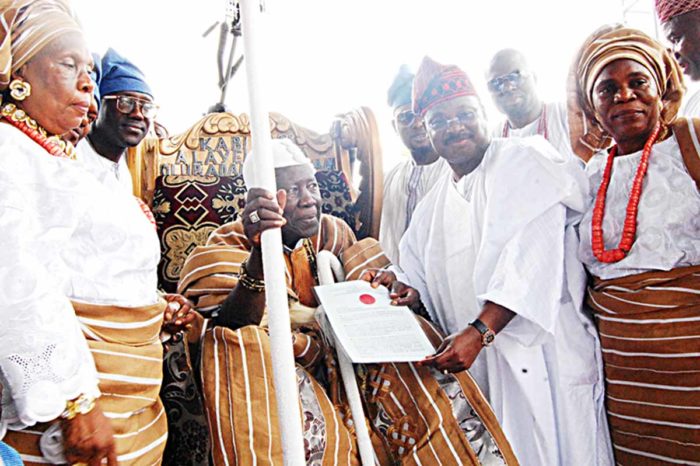 Twenty-one newly elevated High Chiefs and Baales in Oyo State received beaded crowns and staff of office at the ancient Mapo Hall in Ibadan on Sunday.

The newly elevated Obas passed through spiritual rites and proceeded to receive their staff of office from Gov. Abiola Ajimobi.

Speaking at the occasion, Ajimobi said the elevation was not to change the history, culture and tradition of Ibadan land but to consolidate and elevate the Olubadan and members of his council.

“We will never disparage nor relegate the status of the Olubadan of Ibadanland.

The governor said the review of the 1957 Olubadan Chieftaincy Declaration was effected as a result of the several requests for its review to allow the traditional rulers compete favourably with others.

He said that government had received requests for the review from the Ibadan Council of Elders, Central Council of Ibadan Indigenes and prominent individuals like Chief Theophilus Akinyele and the late High Chief Omowaye Kuye.

“Many states have done it. There are 52 in Lagos, and Ibadan, which was known as the headquarters of the South-West, has only a king.

“We will not fight the Olubadan as it is being touted.

“Olubadan remains the paramount ruler of Ibadan. He remains the consenting and prescribed authority for Ibadan land.

“Let me inform you that this administration adhered strictly to due process and the provisions of the law in arriving at the elevation.

“I also want to state that we have achieved this without any legal impediment,’’ Ajimobi said.

Ajimobi said that every successive government in the state had reviewed the chieftaincy declaration, stressing that some implemented the recommendations while others failed to do so.

He urged the new Obas to use their elevated position to promote peace and unity while refraining from acts capable of tarnishing their esteemed position.

The governor, who also advised them to stay away from politics, congratulated the Olubadan and urged him to remain the father of all Ibadan citizens.

Ajimobi gave an assurance that his administration would not relent in its efforts at transforming and repositioning the state.

Mr Bimbo Kolade, the State Commissioner for Local Government and Chieftaincy Matters, commended the governor for resolving the 34-year-old chieftaincy tussle in Ado-Awaye area of the state.

Responding on behalf of the new obas, Balogun described the event as a welcome development.

Balogun, who commended the governor for what he called his doggedness and exemplary leadership, pledged the unflinching commitment of the new obas to the continued development of Ibadanland.