Mayweather: This is my last fight 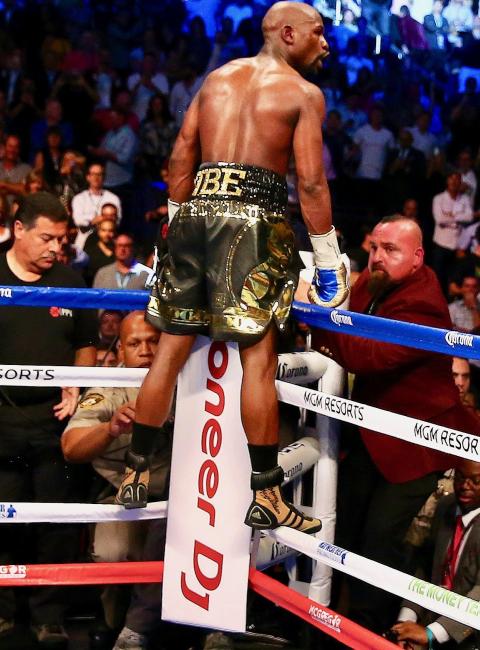 Floyd Mayweather says he “chose the right dance partner” for his final contest, after stopping UFC lightweight champion Conor McGregor in the 10th round of their Las Vegas super-fight, saying that he has fought his last fight.

The 40-year-old American extended his perfect record to 50-0 having come out of retirement for what could be boxing’s most lucrative fight.

After several heated exchanges in the build-up, Mayweather said the fighters gave the fans “what they wanted”.

“He is a tough competitor,” he said.

“He was a lot better than I thought. But I was the better man.

“I guaranteed everybody this would not go the distance. Boxing’s reputation was on the line.”

Mayweather, whose victory meant he surpassed Rocky Marciano’s record of 49 wins without defeat, said he “looked forward to going down in the Hall of Fame”.

“This was my last fight, for sure,” said the former five-weight world champion. “I chose the right dance partner. Conor McGregor, you are a hell of a champion.

McGregor, 29, was making his professional boxing debut at the T-Mobile Arena.

The Irishman looked to be on top in the early rounds but Mayweather, who boasts 27 knockouts in his 50 victories, said he was unfazed.

“Our gameplan was to take our time, go to him, let him shoot his shots early and then take him out down the stretch,” he said.

“We know in MMA he fights for 25 minutes. After 25 minutes, he started to slow down.”

He said: “I thought it was close. I get a little wobbly when I’m tired.

“The referee could have let it keep going, let the man put me down. I am clear-headed.”

‘You won’t see me any more’

Mayweather first retired after beating Andre Berto in September 2015, claiming he had “nothing left to prove”.

However, he added: “This is my last one. You won’t see me any more. Any guy that’s calling me out, forget it.

“I look forward to becoming a boxing trainer, helping fighters.”

Mayweather admitted the fight had gone on longer than he and father Floyd Sr had expected.

“Me and my father, we don’t always see eye to eye but we get great results.

“My dad thought it would be the seventh or sixth. It took us a little longer than expected but we did what we said we would do.”

During the fight, Mayweather seemed angered by McGregor punching him to the back of his head.

“I let the referee do his job,” he said. “I’m not here to bash the referee but you know what was going on. A lot of rabbit punching.

“In 21 years I had some great fights, some boring fights, but at the end of the day I will always be seen as a winner.”