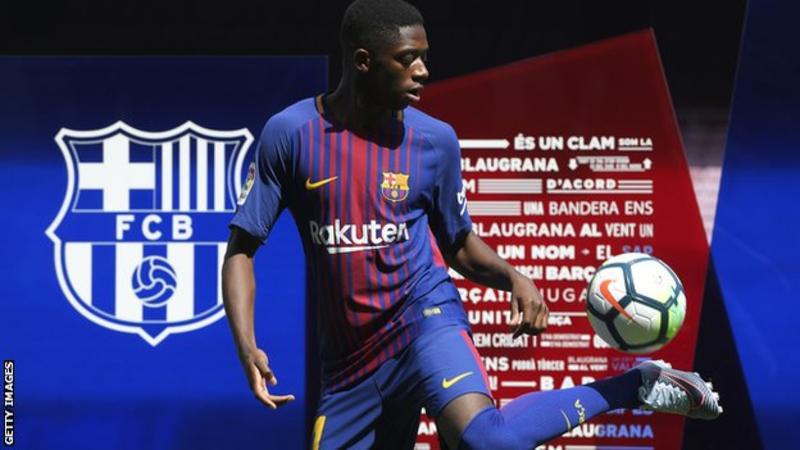 Barcelona have completed a deal to sign Borussia Dortmund forward Ousmane Dembele for an initial £96.8m, potentially rising to £135.5m.

The 20-year-old France international signed a five-year contract at the Nou Camp alongside the club’s president Josep Maria Bartomeu on Monday.

BBC Sports reports that the deal is the second most expensive of all time, eclipsed only by Neymar’s recent £200m move to Paris St-Germain.

Dembele said: “I’m very happy to be here. It has always been my dream to be at Barcelona and now I’m here I’m very happy.

Dembele’s last appearance for Dortmund came in the German Super Cup on 5 August. The Bundesliga side rejected a bid from Barca earlier in August, with the player then suspended for missing training.

Dortmund said they rejected Barca’s approach because their offer “did not correspond to the extraordinary footballing and additional value of the player and the present economic situation of the European transfer market”.

With regard to the agreed fee, Dortmund said in a statement the payment of add-ons “was agreed up to a maximum total amount of approximately 40% of the fixed transfer fee”.

Barca have failed with three bids for Liverpool midfielder Philippe Coutinho, the most recent of which was £114m.

Officially, the £75m signing of Luis Suarez from Liverpool in 2014 was their most expensive previous purchase.

However, Bartomeu has said in the past that “the overall cost of the operation” to sign Neymar from Brazilian club Santos in 2013 was “over 100m euros (£92m)”, despite the transfer fee having been disclosed as