Lagos Baale to remain in prison with wife 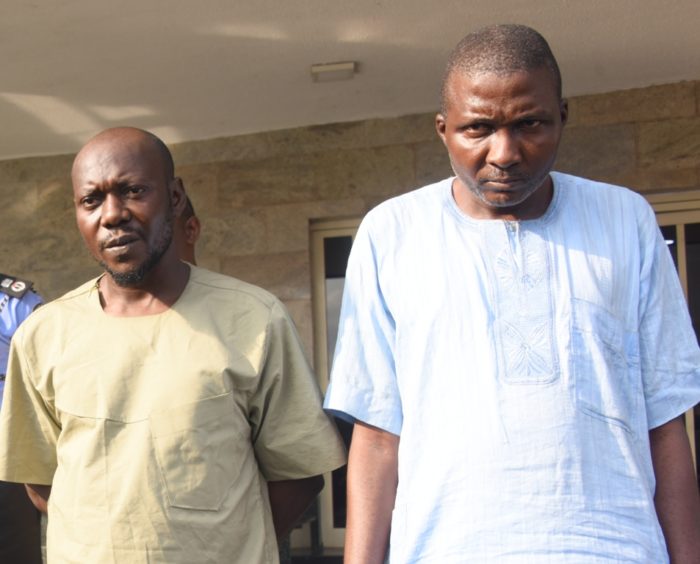 Alleged suspects, Baale of Shangisha, Chief Yusuf Ogundare (right), with his brother and accomplice, Mohammed Adams (left), being paraded during a press briefing at the Lagos House, Ikeja, on Thursday.

An Ikeja High Court on Tuesday dismissed an application filed by the deposed Baale of Shangisha, Mutiu Ogundare, seeking to vary his bail conditions.

Ogundare had filed the application alongside his wife, Abolanle and Mohammed Babatunde.

During the proceedings on Tuesday, Ogundare’s counsel, Chief H. N. Ogirien, requested that the court should reduce some of the bail conditions, especially the requirement of a surety, who is a Grade Level 17 officer in the Lagos State Civil Service.

“My Lord, we are unable to secure a Grade Level 17 officer in the Lagos State Civil Service, no one is willing to come forward and stand as surety.

Shedding more light on Ogundare’s predicament, Ogirien said “This situation is peculiar because a man and his wife are both incarcerated.

Responding to Ogirien’s request, the vacation judge, Justice Oshodi asked why the application was not presented before the magistrate court which is a lower court where the bail of the Baale was initially granted.

“Are you saying that there are no traditional rulers within the jurisdiction that can stand for him?” the judge querried.

The judge thereafter dismissed the application of the embattled former traditional ruler.

Governor Akinwunmi Ambode had on July 16 deposed Ogundare for faking his own kidnap in a bid to allegedly blackmail the Lagos State Government.

His wife, Abolanle and Babatunde were alleged to be accomplices in the kidnap plot.

On July 20, Magistrate T. Akanni of an Ogba Magistrates’ Court had granted the trio N2 million bail with two sureties each in like sum.

One of the sureties must be a traditional ruler, an individual with registered property in Lagos, a tax payer and a grade level 17 officer in the state public service.