Why I Opposed Gov Ajimobi On Chieftaincy Reform - Olubadan 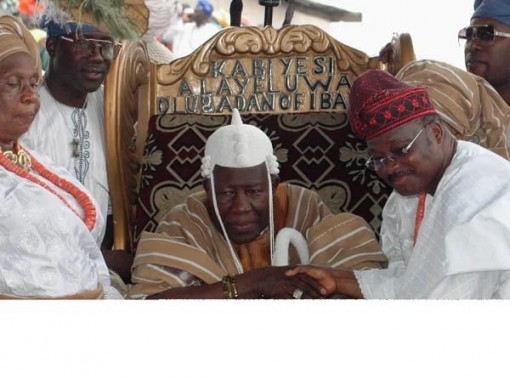 The Olubadan of Ibadanland, Oba Saliu Akanmu Adetunji Aje-Ogungunniso 1 has reacted to the recent coronation of new obas in Ibadanland saying that he opposed the Olubadan Chieftaincy reform because the process leading to it was faulty.

Oba Adetunji, in a statement signed by his spokesman, Adeola Oloko, said his resistance to the mass coronation exercise ”is to prevent breakdown of law and order, complication and dire consequences in Ibadan Chieftaincy System”.

The foremost Ibadan monarch said he was not consulted by the government before the reform was instituted.

He did not also take it kindly that the state government tried to paint him as a partisan monarch. He told Governor Abiola Ajimobi of Oyo State that he is a monarch and not a politician.

His words: “As a monarch, I’m a father of all, irrespective of sex, ethnic and ideological persuasions. The person or group who would use the royal stool of Olubadan for selfish political reason is yet to be born”.

”Since Friday March 4, 2016, when I ascended the exalted throne of Olubadan, I have opened the gate of our palace wide to all manner of people. If you belong to APC, PDP, Labour, Accord and/or more, you are most welcome. So, politics has nothing to do with my resistance or opposition to the chieftaincy review spearheaded by the Oyo State Government”.

Oba Adetunji described as unfortunate the comment by Governor Ajimobi that recent utterances from the palace are tending towards the political. He challenged the governor to bring out evidence to support his claim.

He said: “There is no press statement issued from the Olubadan’s media office which did not enjoy my blessing before it was made public. While I am aware that people react to age differently, I am not old enough to be misinterpreted by anybody, even at 89. Governor Ajimobi stated that he invited us to the Governor’s Office over this matter and visited me in the palace later. While this is true, I wish to respectfully state that the Boade Panel was inaugurated on May 19, 2017, His Excellency, Governor Ajimobi invited me to the Governor’s Office on Wednesday, June 14, 2017 after the panel had sat for four weeks.

He continued: “At that meeting, His Excellency, the Oyo State Governor, the High Chiefs and State House Correspondents would recall my opposition to the chieftaincy review. My question is ‘did anybody put words in my mouth in that recorded tape? When he invited me to his office and visited me in the palace on Sunday, June 18, 2017, the Boade Panel was almost through with its job. When we met at the inner chamber, what the State Governor came to tell me was that he knew I should have been consulted first. So, it is not true that I was consulted, as claimed by him. If I had been consulted, this error would have been avoided. The desecration of the crown would have been averted”.

The Olubadan of Ibadan land, congratulated all Ibadan people for keeping the peace despite the brazen abuse of Ibadan custom and tradition, adding that stated that these times would pass.

Oba Adetunji also commended all his brother-monarchs for their solidarity and cooperation.