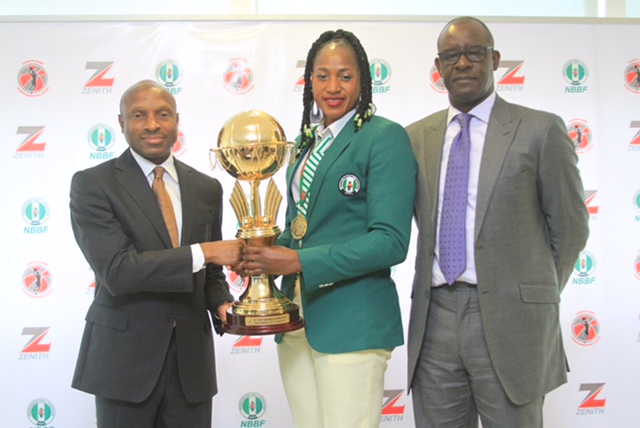 Zenith Bank, sponsor of the national Women Basketball League, says it will give adequate support to the champions of the 2017 FIBA Women’s Afrobasket Championship, D’Tigress for the World Championship in Spain next year.

The Group Managing Director, Peter Amangbo, made the promise on Thursday in Lagos as Zenith Bank received members of the victorious team at its headquarters in Lagos.

“Zenith Bank will throw its weight behind the team for the World Championship slated for Spain next year.

He congratulated the players and officials for the remarkable feat recorded in Bamako, Mali, noting that the bank and indeed Nigerians were proud of their achievement.

Amangbo said: “It was not only the win that was exciting but also the way you won.

“During the competition, we were following your progress with keen interest and it is heartwarming that you came back as champions.

“We always support people who are committed just like you. Nigerians have made a mark in basketball.

“We all know about the exploits of Akeem Olajunwon of the Toronto Raptors fame in the U.S. NBA. He also led the Rockets to back-to-back NBA championships in 1994 and 1995.

“Raptors is my favourite team and the General Manager of the team is a Nigerian.’’

The Captain of the team, Aisha Muhammed, commended the bank for hosting the team and supporting the game in the country.

“I am happy to be here because the support Zenith has been giving the game is a big one for our colleagues playing in Nigeria,’’ she said.

The team was rewarded with cash awards, which were paid into accounts opened for them during the visit, and for which they were all presented with Debit Cards.

The Vice-President of the Nigeria Basketball Federation (NBBF), Babatunde Ogunade, who led the team, praised Zenith Bank for its continued support for the game.

He noted the fact that the bank had through its sponsorship of the Zenith Bank Women Basketball League enabled Nigerian women players to challenge for the leadership of game in Africa.

The D’Tigress won all their matches to final in the championship staged in Bamako, Mali.

To emerge champions, they defeated the defending champions and tournament favourites, Senegal 65-48 in the final. They had also defeated the Senegalese 58-54 in the group stage of the biennial competition.

Nigeria’s Evelyn Akhator emerged one of the five best players in the tournament and that her contributions will not go unnoticed as she averaged 15 points per match.

Senegal’s Astou Traore was named the competition’s Most Valuable Player.