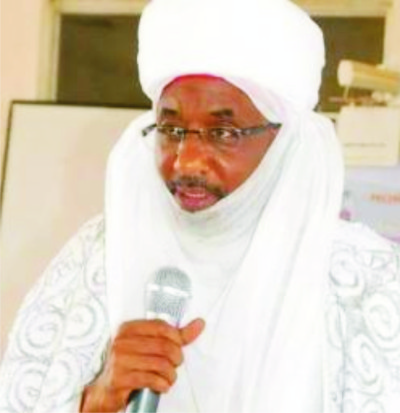 The Emir of Kano, Alhaji Muhammadu Sanusi II on Friday called on traders to reduce the prices of their goods in view of the economic situation in the country.

The Emir made the call while addressing the people of the state, shortly after he led the Eid prayer at the Kofar Mata Central Eid ground in Kano.

“I want to use this occasion to call on the traders to reduce the prices to alleviate the sufferings of the people, as we expect bumper harvest, “he said.

He prayed for the sustenance of peace and unity of the country.

He said there was need for the people of the state to also continue to pray for peace and progress of the state and the country at large.

Sanusi II stressed the need for people of the state to shun rumour mongering and acts capable of causing misunderstanding and ill-feelings, especially among the leaders of the state.

The emir, who also prayed for bumper harvest in the state, however, advised unemployed youths to engage in any useful ventures for be self-reliance and contribute to the development of the country.

The monarch urged Muslims to fear God in all their activities, reminding them that each and every one of them must give account of his or her deeds hereafter.

Among those that attended the prayer at the Kofar Mata Central Eid ground were; Gov. Abdullahi Ganduje, the Secretary to the State Government, Alhaji Abdullahi Alhaji, among other top government functionaries.

Traditional rulers from the 44 Local Government Areas of the state also attended the occasion.

Security was tight during the prayer as armed policemen and other security personnel were deployed to various Eid grounds and other strategic places in the area to ensure peaceful occasion.