Pacquiao pulls out of Horn rematch 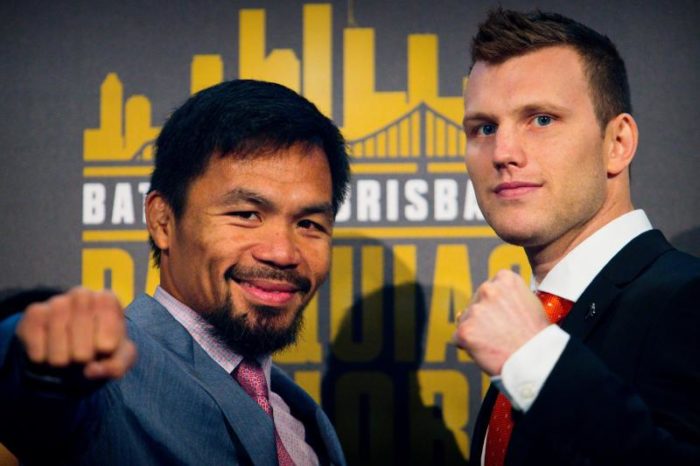 Manny Pacquiao will not fight Jeff Horn in a November 12 rematch after pulling out of the bout due to his Filipino government commitments.

Australian promoter Dean Lonergan confirmed the news on Friday that Pacquiao’s job as a senator in the Philippines will mean he’s unable to fight Horn in November, per the Associated Press (h/t ESPN.com):

“On behalf of the Philippines government, he (Pacquiao) will be part of a delegation that will visit China in the middle of his proposed preparation period for the fight. Pacquiao is committed to fighting again in 2018 and a rematch with Jeff Horn for the WBO world welterweight title.”

Horn defeated Pac-Man in a controversial unanimous-decision victory in Brisbane on July 2, although the defeated eight-weight world champion made it clear he wanted a rematch.

However, the Australian’s Brent Read pointed out the match could take place in future as the fixture hasn’t been cancelled altogether, with a 2018 date looking like the next possible option:

The Associated Press reported American Jessie Vargas could take Pacquiao’s place and step in to fight Horn on November 12, having lost to the Filipino via unanimous decision last November.

The World Boxing Organisation announced one week after Horn’s victory against Pacquiao that an independent panel of judges had arrived at the same outcome, clearing up some of the controversy.

Pac-Man first moved into the Philippines government in 2010, when he was elected congressman of the Sarangani district, and he rose to the position of senator in May 2016.

Many boxing fans and Pacquiao supporters may wish to see a rematch against Horn sooner rather than later, but governmental duties mean the Filipino favourite looks likely to be absent from the ring until 2018.