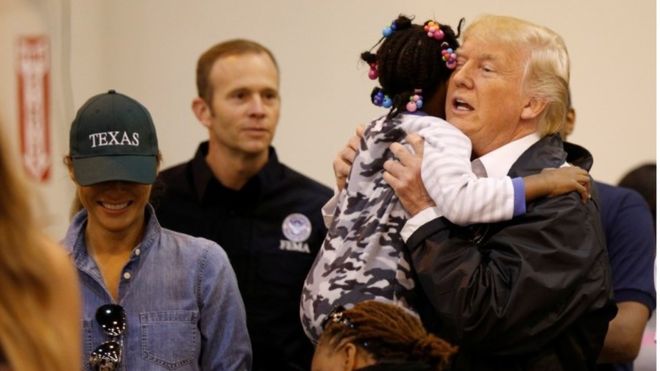 US President Donald Trump is meeting people caught up in the devastation wreaked by Hurricane Harvey in Texas.

The hurricane made landfall in the state a week ago, causing devastating floods.

Some residents have been allowed to return to their homes but flood waters are still rising in other areas.

Harvey has been blamed for at least 47 deaths, and about 43,000 people are currently housed in shelters. Mr Trump has asked Congress for $7.8bn (£6bn).

BBC reports that the sum would be an initial payment to help with recovery efforts following the flooding in both Texas and Louisiana, which has also hit production at America’s main petrol and oil refining centre.

Governor of Texas Greg Abbott has said the state may need more than $125bn in aid.

President Trump and his wife Melania visited Texas earlier in the week but stayed clear of the disaster zone, saying they did not want to divert resources from rescue efforts.

However, the president was criticised for not meeting victims of the flooding and for focusing largely on the logistics of the government response.

Visiting Texas again on Saturday, Mr and Mrs Trump made a point of meeting flood survivors and volunteers in Houston. They took part in food distribution at a shelter, handing out packed lunches, and posed for photographs with victims when they requested it.

Later in the week, they are expected to travel to Lake Charles, Louisiana, which was also hit by flash floods.

President Trump has declared Sunday a “National Day of Prayer” for victims of Hurricane Harvey.