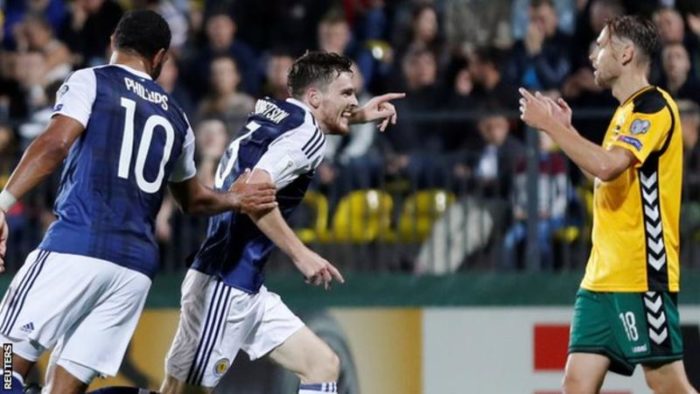 Scotland celebrate one of their goals

Scotland breathed fresh life into their World Cup qualifying campaign with a convincing win away to Lithuania.

There had been chances missed at both ends by the time Stuart Armstrong rose to head the visitors into a deserved lead after 25 minutes.

It wasn’t long before Andrew Robertson topped that with a sublime looping drive from just outside the box.

Scotland’s pace and control dropped after the break, but James McArthur prodded in a third to settle the game.

The win moves Gordon Strachan’s side ahead of Slovenia, who lost 1-0 away to Slovakia, into third place in Group F on goal difference.

But they remain four points adrift of the second-top Slovaks thanks to an Adam Nemec goal nine minutes from time in Trnva, while England retain their two-point cushion at the top after their 4-0 win in Malta.

The beginning of this impressive Scotland victory was pretty frantic. Inside the first 20 minutes, there could have been three or four goals, with Leigh Griffiths, Armstrong – two of six Celtic players who started – and Matt Phillips all going close at one end and, after McArthur gifted Lithuania possession, Arvydas Novikovas almost making the breakthrough at the other.

That was a scary moment for Scotland. Novikovas really ought to have scored rather than pulling his shot wide of Craig Gordon’s right-hand post.

And there was another soon after when Novikovas again launched a free-kick that was heading for the top left corner of Gordon’s net until the Celtic goalkeeper flung himself across goal and pushed it away.

From that moment, though, Scotland took over. They were slick and dangerous, playing at a tempo that Lithuania found hard to cope with.

It was substantial stuff from them, the best they have played in a game of this importance for quite some time.

The opener was deserved when it came, a simple enough affair from a Griffiths corner that was nutted home by Armstrong, a top performer all night for Scotland. It was the Celtic man’s first goal for his country. Beautifully timed too.

Five minutes later, there was a second – and it was a beauty. Scotland countered from their own penalty box, sweeping down the left-hand side through Phillips.

When James Forrest played it to the outstanding Robertson, the Liverpool full-back was decisive and deadly. His sumptuous shot from distance gave Ernestas Setkus in the Lithuania goal no chance.