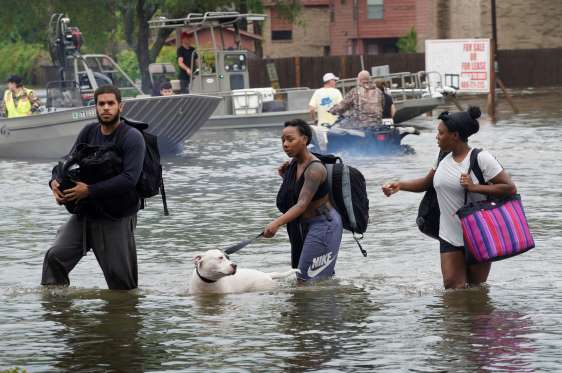 Residents displaced by Hurricane wade through the flood

No Nigerian life is lost to the Hurricane Harvey ravaged Texas as the disaster has claimed dozens of lives so far, the Nigerian in Diaspora Organization (NIDO) Americas, has said.

Dr Akin Awofolaju, a NIDO official told reporters on Sunday that the organisation had reached out to Nigerians in the area.

The devastating hurricane made landfall in the state a week ago and has been blamed for at least 47 deaths.

No fewer than 43,000 people are currently housed in shelters while 156,000 homes are reportedly affected.

“So far, we don’t have any Nigerian who has lost his or her life in the hurricane. We’ve reached out to them and they are safe.

“We’ve spoken and have been speaking with Nigerians there; we have been reaching out to them and so far, no death has been recorded among Nigerians,” he said.

NAN gathered that many Nigerians in Texas whose areas are not affected by the hurricane are accommodating Nigerians that are affected, pending when the floods recede and government relief assistance.

Awofolaju noted that for more than three months, relevant authorities have been telling people to evacuate, saying many people actually evacuated.

“But one good thing about the U.S. is that insurance will cover most of the damages,” he said.

President Donald Trump on Saturday returned to Houston in company of First Lady Melania, praising the relief response on his second visit to Texas.

The president also declared Sunday a “National Day of Prayer” for victims of Hurricane Harvey.

Trump had asked Congress for 7.9 billion dollars as an initial payment to help with recovery efforts following the flooding in both Texas and Louisiana.