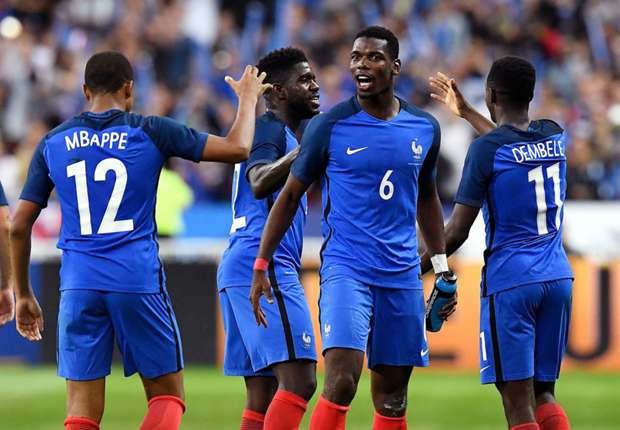 France were held to a surprise home goalless draw by the world’s 136th-ranked side Luxembourg in their World Cup qualifier in Toulouse.

Les Bleus, who beat the Netherlands 4-0 on Thursday, had 76% of possession, 34 shots and hit the woodwork twice but could not find a winner.

It is the first time they have failed to beat Luxembourg since 1914.

The point does keep them top of Group A, although their lead over second-placed Sweden is now just one point.

Didier Deschamps fielded a strong side on Sunday, which included Manchester United midfielder Paul Pogba, Atletico Madrid forward Antoine Griezmann and Kylian Mbappe, who recently joined Paris St-Germain on loan from Monaco with a view to a £166m transfer next summer.

Griezmann smacked a 30-yard free-kick off the bar five minutes before half-time while Pogba saw a header rebound off the frame of the goal late on.

It could have been worse for Les Bleus, though, as Luxembourg substitute Gerson Rodrigues outpaced Laurent Koscielny in the 79th minute before seeing his shot strike an upright.

“Thursday’s result was important but so was getting three points today, so we’ll need to fight to the end,” Deschamps told TF1.

“The last two games will be decisive. We are in a better situation than we were in June, although we are disappointed tonight.”