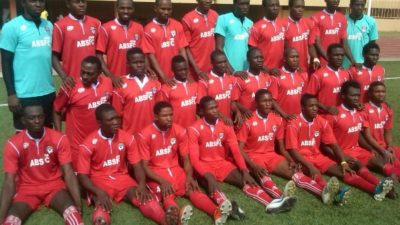 Adeshina Gata scored a brace as Abubakar Bukola Saraki (ABS) Football Club of Ilorin came from a goal down to beat visiting Abia Warriors FC of Umuahia 2-1 on Sunday.

The Match Day 37 fixture in the 2016/2017 Nigeria Professional Football League (NPFL) was played at the Kwara Stadium Complex in Ilorin.

The visitors drew the first blood in the fourth minute when Moses Omoduemuke finished a well-executed counter-attack to put the visitors ahead.

The hosts thereafter overcame their lethargy and dictated most of the proceedings in the first half, with only some occasional counter-attacking moves by Abia Warriors.

But Wasiu Alalade and Martin Ossy lost many goal scoring chances for the game to stay 0-1 at half-time.

ABS FC restarted the game better than the visitors, as they picked up from where they ended the first stanza.

Six minutes after the restart, Gata pushed the ball into the net during a goalmouth scramble to level for the hosts.

Samuel Oyedeji had raced ahead to reach the ball which he crossed for Gata to make judicious use of.

Alalade could have given his team the lead in the 74th minute after he beat Abia Warriors’ defenders to score, but the assistant referee’s offside call cut the striker’s celebration short.

There was a mild drama in the 77th minute when the centre referee sent off Abia Warriors’ Abiodun Adebayo and he refused to leave the pitch.

The action triggered a tense situation in the stadium, with the hosts’ fans booing the visitors.

Gata then went on to put the icing on the cake for the hosts with one minute left on the clock by heading past goalkeeper Chinedu Anozie to put the final score at 2-1.

ABS FC will now travel to Lafia to face hosts Nasarawa United in their final league game of the season.