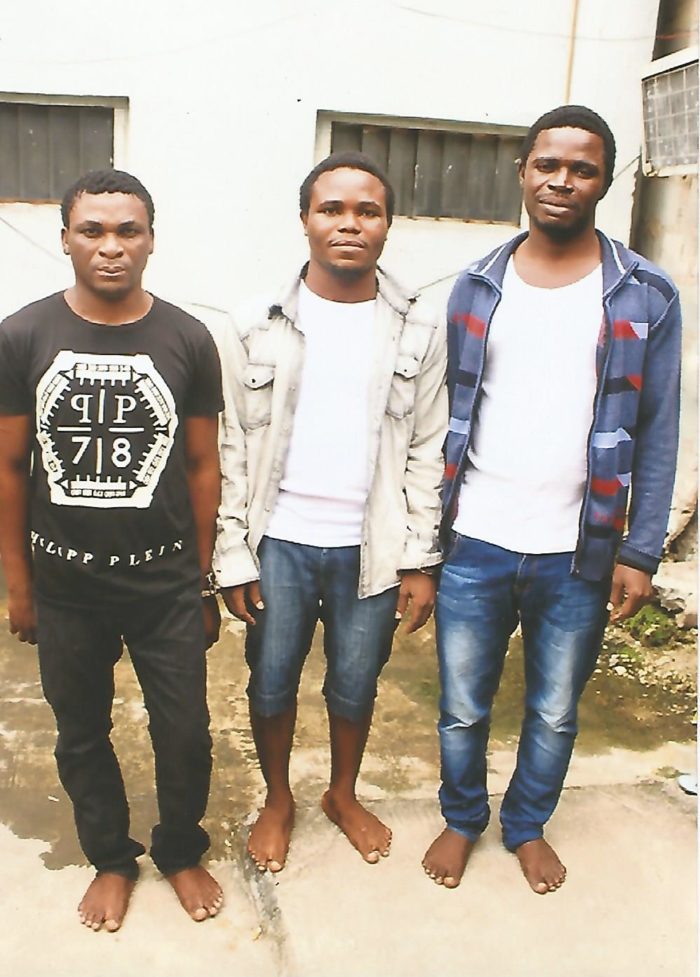 The car has the Registration Number APP 655 EZ from them.

The police alleged that nemesis caught up with the suspects when some concerned residents of Railway line area at Oyingbo, Ebute-Metta, Lagos tipped off the Deputy Commissioner of Police, DCP in Charge of FSARS, Mr. Ibrahim Kaoje that they suspected that the youths who normally bring different brands of cars to the area at midnight were armed robbers.

The police alleged that following the report, Kaoje deployed a crack team led by CSP Abdulahhi Muhammed to the area to investigate and arrest the suspects.

They alleged that after days of decoy surveillance by the team, the operatives swooped on the black spot of the suspects on 12 June, 2017 and arrested three suspects while their alleged leaders identified simply as Oyo and Emma managed to escaped with their weapons.

The police recovered a Toyota Camry Car from the arrested suspects. Police said that during investigation, the arrested suspects allegedly confessed to the crime that they specialized in snatching vehicles from owners in Lagos and other States with their fleeing leaders using pump action guns and locally made pistols.

And after investigation by Inspector Rotimi Ola and his team, the suspects were arraigned before an Igbosere Magistrate Court, Lagos on a 2-count charge of armed robbery.

Police counsel, Abaraham Fadipe said that the offences the accused persons committed were punishable under sections 6(B), 1(1) (2) (A) of the robbery and firearms (special provisions act) Cap R11 Laws of the Federations of Nigeria, 2004.

Ugbomoiko adjourned the case till 10 October, 2017 for DPP’s advice report.