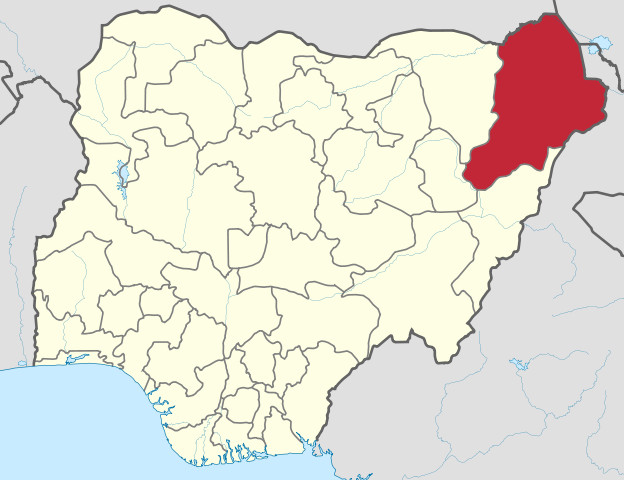 Location of Borno State in Nigeria. By Derivative work: User:Profoss - Original work:Uwe Dedering - This vector image was created with Inkscape.This file was uploaded with Commonist.This vector image includes elements that have been taken or adapted from this:  Nigeria location map.svg (by Uwe Dedering)., CC BY-SA 3.0, https://commons.wikimedia.org/w/index.php?curid=17436023

The Police in Borno on Saturday said two female suicide bombers were killed when they detonated the Improvised Explosive Device (IED) strapped to their bodies in the outskirts of Maiduguri.

Victor said that the incident occurred on Friday at about 17:38 p.m. when the female suicide bombers detonated IEDs against a taxi on Maiduguri-Mafa Highway.

“Only the suicide bombers died in the blast, while eight others including a staff of the NDLEA sustained injuries and are responding to treatment.

“The taxi with registration number XA 479 DRZ was conveying bags of charcoal and two female passengers, including a tricycle machine was also affected in the explosion,” he said.

Victor added that the police EOD had sanitised the scene while normalcy had been restored to the area.