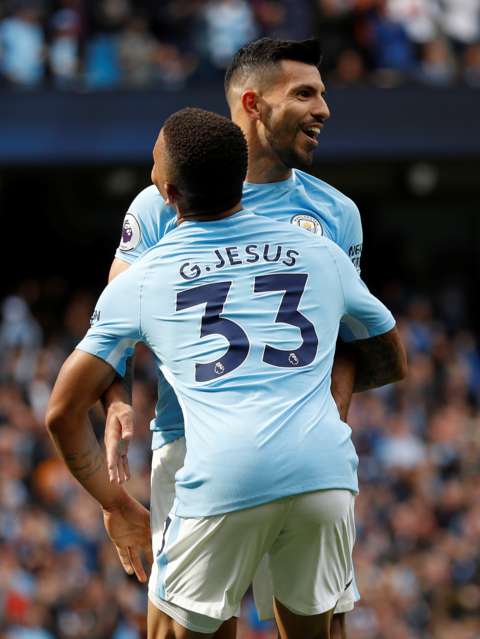 Jesus and Aguero celebrate of of City's goals

Manchester City tore apart Liverpool’s feeble defence to claim an emphatic victory over the 10-man visitors and move top of the Premier League.

Sadio Mane was dismissed after his raised foot collided with the face of City keeper Ederson, who required 10 minutes of treatment on the pitch.

Gabriel Jesus scored either side of the interval, with Leroy Sane scoring twice late on, including a stunning fifth.

BBC Sports reports that the German substitute curled a powerful left-foot strike into the top corner from 20 yards in injury time.

The impressive Kevin de Bruyne provided Aguero’s opener and also picked out the unmarked Jesus to head in City’s second in added time after Ederson’s injury.

Aguero then unselfishly squared the ball for the Brazilian to tap in his second, with both strikers having sliced through Liverpool’s hapless back four.

Victory lifts Pep Guardiola’s side above rivals Manchester United, who face Stoke away at 17:30 BST, and ensures a first defeat of the season for Jurgen Klopp’s men.