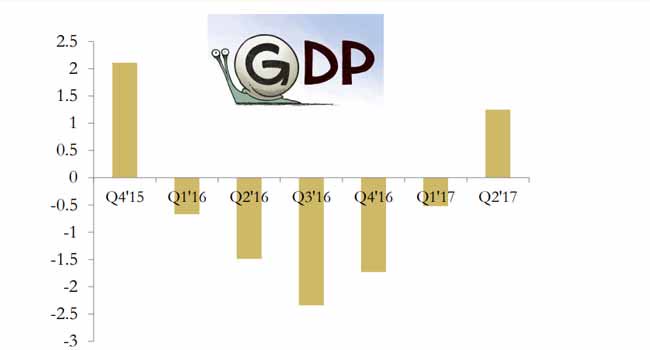 Nigeria out of recession

A South-Africa-based don, Mr Christopher Ifeacho, says sustainable growth must be maintained to ensure that the Nigerian economy remains out of recession.

The National Bureau of Statistics (NBS) said recently that the country`s economy expanded by 0.55 per cent in the second quarter of 2017.

Ifeacho, lecturer in the Department of Economics and Public Management at Durban University of Technology, said Nigeria has a robust economy with potentials to rank among the best in the world in terms of resource endowment and human capital.

He told the News Agency of Nigeria (NAN) on Monday in Durban, Kwazulu Natal Province of South Africa, that government has a huge role to play in the sustainability of the economy.

“Each phase of the business cycle of the economy comes with its own seed of destruction, and so, interventions in terms of appropriate fiscal and monetary policies are needed to smoothen the economy,” he said.

Ifeacho said that such interventions should support domestic production against “ fierce” competition from world market prices.

“ If our local industries are protected, a lot can be produced locally which will contribute immensely to Gross Domestic Product(GDP).

“Practically importing almost anything is largely detrimental to the growth of the economy,” he said.

According to him, the government should encourage local manufacturers of parts for industries and allied sectors.

“ If this kind of policy is emulated, it can enhance growth on the long run,” he said.

Ifeacho, who is also the Secretary of Nigeria Union in the province, said that tourism should be strengthened to attract investors to the country.

“ I believe Nigeria is blessed with huge tourism potentials. The government should improve the tourist sites in order to attract people into the country.

“This process will reduce the demand for dollars as more investors will visit the country rather than our people looking for dollars to travel out,” he said.