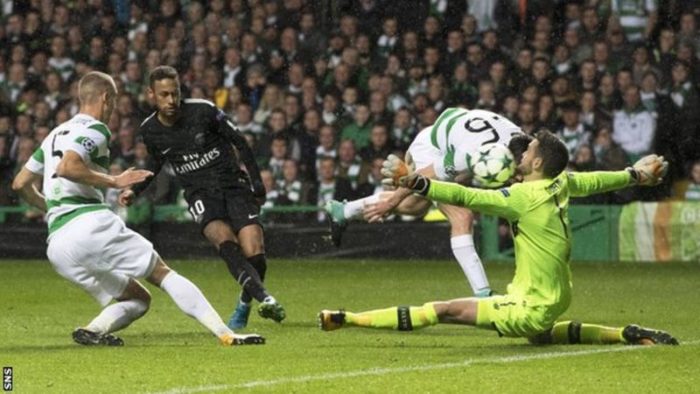 Celtic sustained their heaviest ever home European defeat as Neymar led the way for Paris St-Germain in the Champions League group stage opener.

The world’s most expensive player coolly finished and then had a hand in PSG’s second, which was finished emphatically by Kylian Mbappe.

Edinson Cavani converted a penalty for the visitors’ third before the break.

Mikael Lustig’s own goal was followed by Cavani’s second of the night, a diving header.

Elsewhere in Group B, hosts Bayern Munich won 3-0 against Anderlecht, who had a man sent off.

Celtic have hosted many of the great powerhouses of European football in Glasgow over the years, but even those with the longest memories would probably struggle to recall a side as devastating as PSG.

Their speed of thought, speed of movement, accuracy and imagination was extraordinary. Their confidence on the ball – even when playing intricate passes in their own penalty area to get out of trouble – was a joy.

Quality on this scale costs big-time, of course. The biggest compliment you can pay the visitors is that they looked every inch the half-billion-pound team they are.

Celtic boss Brendan Rodgers went with young Tony Ralston at right-back with Lustig playing centre-half. Ralston was keen as mustard, biting into tackles on Neymar, but this was a night when enthusiasm and heart were not much use to Celtic.

According to BBC, Unai Emery’s visitors had the ball in the net after 15 minutes but Cavani was offside. It was a warning to Celtic, not that it was needed. The subtlety of PSG’s play was not something they could cope with. Soon, the doors started opening for the visitors.

Celtic had legitimate gripes about a foul on Scott Sinclair moments earlier, but when PSG countered it was precise and beautiful. Adrien Rabiot, relatively unsung in this team of stars but sensationally good on the night, played Neymar in behind Ralston and the Brazilian thumped his shot past Craig Gordon.