I was tired of running, hiding - Rearrested killer 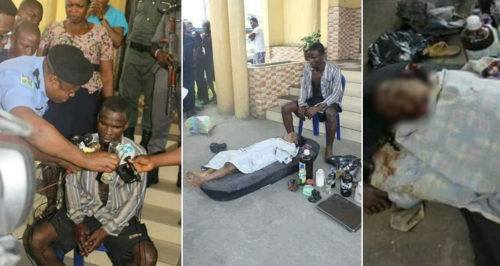 There was jubilation at the Rivers State Police Command headquarters, Moscow road Port Harcourt on Monday as the Commissioner of Police, Zaki Ahmed paraded the alleged ritual killer, Ifeanyichukwu Maxwell Dike, who was rearrested in Barkin Ladi in Plateau State.

After the parade, the suspect denied being aided by any police officer to escape on August 20 at the State Criminal Investigation Department, SCID, Port Harcourt after he was paraded for raping and killing eight year old Chicamso Mezuwuba.

Dike told journalists that he became tired of running, hiding and was starving. He said he gave his sister’s phone number to the police in Plateau state knowing that she would alert the Police in Rivers.

Recounting how he escaped on the fateful day, he said: “It was late in the day, and when my IPO asked me to go inside the cell I used the opportunity to run away.

”When I got to Jos, I was able to get better food to eat because I was very hungry. Where I stayed to get food to eat I was caught and later handed over to the Police.

”At first, I was hiding my identity. But when I got fed up, I decided to give them my Aunty’s number. As soon as they called my Aunty, my Aunty called my IPO who now confirmed that I was the person.”

“I am a student of UNIPORT. When I got to Jos, I started hiding again even though I knew that nobody knows me there.

“I was living inside an uncompleted building in that place but I could not endure anymore because I was hungry. I came out and somebody looked for my trouble.

“The Hausa boy used something like a knife to cut my hand, out of anger I took a screw driver and stabbed him. That’s how they took us to police station.

“When we got to the Police, I told the Police who I am but they did not believe me until I called one of my aunties that confirmed to them.

“I know that what I have done is wrong. I know that the world is not happy with me but I want to say I am sorry.”

Dike who adorned a white T-Shirt was brought to the Police headquarters by heavily armed policemen.

It would be recalled that the former IPO who allowed him to escape, Sergeant Johnbosco Okoronzie is currently being detained at the Port Harcourt prison on a two-count charge of conspiracy.

While parading the suspect, Ahmed said the re-arrest of the most wanted criminal was a fulfilment of his promise and “determination to bring the suspect to book.

”It is a fulfilment of our resolve to re-arrest Ifeanyi Dike, a 200-level student of the University of Port Harcourt, who mindlessly and without the fear of God, raped and murdered 8 years old Chikamso whose only sin was her absolute trust in her close relation and uncle.

“Today with profound humility, I present to you the most wanted ritual killer, Mr. Ifeanyi Chukwu Maxwell Dike. His re-arrest was made possible by God Almighty, through your numerous prayers and concerns, following his escape three weeks ago.”

He commended journalists and members of the public for their cooperation. “Your positive actions in information dissemination, both in the print, electronic and social media so much circulated, even in faraway places of the world. The consciousness of every Nigerian was awaken in the search for this mindless killer.

“I wish to assure you that justice will not only be done but be seen to be done in the circumstance to bring the full weight of the law to bear on him or any other person implicated in the course of further investigation.”

Ahmed further said the Inspector General of Police, Ibrahim K. Idris was pleased with the rearrest of the suspect and expressed his profound gratitude to members of the public for their cooperation.

He called on all and sundry, particularly members of the public to deploy the same energy in fighting the horror of cultism, armed robbery, kidnapping and other vices that are impacting negatively on the citizenry. ”I believe that this is achievable, if only we can put our minds to it. Yes we can,” he added.

Meanwhile, the father of the late Chicamso, Mr Earnest Mezuwuba expressed gratitude to the police for the rearrest of Ifeanyi Dike.

He said he would no bury his daughter until justice is served.