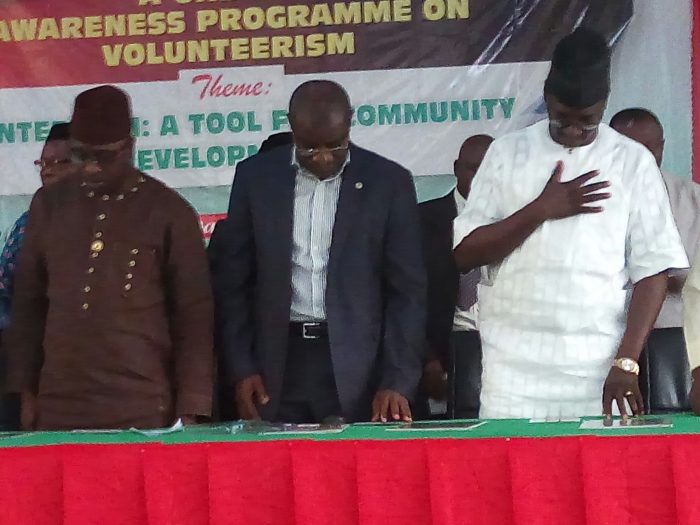 Special Adviser to the governor on Civic Engagement, Kehinde Joseph (left) and other government officials during the event

Lagos State Government on Monday said volunteerism is key in enhancing massive development at the grassroots level in the state.

Special Adviser to the Governor on Civic Engagement, Mr Kehinde Joseph, who spoke at a one day awareness programme, with the theme:  ‘Volunteerism, a tool for Community Development’, stated that it was an open fact that the various communities in the state could not get all they needed from government which was why creating the space and the environment for the people to volunteer was necessary.

According to him, this became critical because volunteerism promoted understanding among various community groups and equally helped to build community social relationship that connected people to each other and their communities.

“It also strengthens trust and solidarity among citizens by giving voice to stakeholders and mobilises the people to contribute to solutions.

Joseph  asked community leaders to always endeavour to identify individuals and groups in their respective communities that could work together for the good of the community.

“Once you have done this, we enjoin you to inform this office so that they can form alliances to deliver on the shared aspiration of the people.”

The special adviser said the current administration had from the outset indicated its resolve to run an all-inclusive governance where everyone irrespective of ethnic affiliation, religious belief and social status would be given the opportunity to contribute to the growth and development of the State.

Ashiru stated that voluteerism would help to save cost, saying that in one study of local governments, it was found that 91 % of volunteer supervisors felt that volunteers permitted local governments to do considerably more without expense or undue cost.

He added that volunteerism was generally recognized to be an effective way to encourage public participation into non-profit or governmental operations and decision-making processes.

Ashiru said volunteers would supplement the normal workforce during times of crisis and especially when workload demands peak, adding that volunteers, who were trained and experienced, provided a ready pool of applicants for employment.

The lecturer also said that volunteers often provide services outside the normal purview of government employees, such as fund raising and advocacy.

“Volunteerism strengthens social connections; it builds a strong, safe and cohesive community and it enhances civic engagement; and delivery of public goods and services,” he said.