Amazing City put four goals past Feyenoord away from home 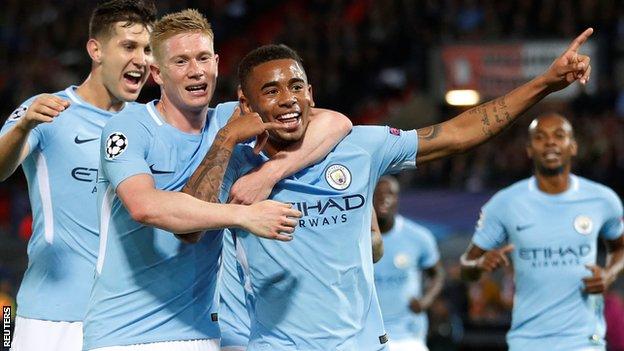 John Stones scored twice as Manchester City got their Champions League group campaign under way with a commanding win over Dutch side Feyenoord in Rotterdam.

Stones registered City’s fastest ever goal in the competition with a header after two minutes as Pep Guardiola’s men made a perfect start.

Sergio Aguero doubled the lead after 10 minutes, latching on to Kyle Walker’s cross and volleying into the roof of the net to claim his 23rd goal in 41 Champions League games for the club.

Gabriel Jesus netted on his Champions League debut as City went 3-0 up after 25 minutes, the Brazilian calmly slotting into an empty net after Benjamin Mendy’s shot had been palmed out by Brad Jones.

Feyenoord improved after the break but City still had too much for them, Stones adding his second with another header from a corner to wrap up a one-sided win for the Premier League side.

In the other game in Group F, Shakhtar Donetsk beat Napoli 2-1 in Ukraine.

Before the game, Guardiola said City had “to win respect in Europe” after making it past the last 16 just once in seven Champions League campaigns, and failing to win any of their last six away games in the competition while conceding 14 goals.

City will not earn that respect on nights such as this, easing to big wins against limited opposition, but they did what they had to do with efficiency and style.

They were also aided by poor defending by Feyenoord, back in the Champions League for the first since the 2002-03 season, with Stone’s opener trickling in after defender Tonny Vilhena made a comically inept attempt to clear off the line.

Aguero’s fine finish was much more about City’s crisp and clean passing play, but Feyenoord’s defensive shortcomings where there for all to see for Jesus’ strike – the home players stood still as the Brazilian fired home, mistakenly believing he was offside – and Stones’ second.

Feyenoord, managed by former Barcelona and Arsenal defender Giovanni Van Bronckhorst, went into the match on a run of four straight wins at the start of the new Eredivisie season but could pose no threat to the visitors as they slumped to the club’s heaviest ever home defeat in European competition.

Just 28% possession and one shot on target betrayed the hosts’ lack of invention, and Van Bronckhorst’s switch to a back four from a three in the second half perhaps spared them an even bigger defeat.