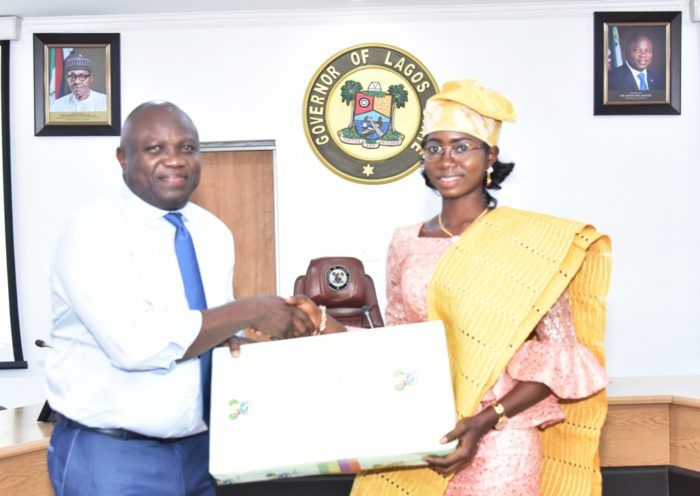 Lagos State Governor, Mr. Akinwunmi Ambode on Wednesday expressed optimism that in no distant time, Lagos would produce its first elected female Governor of the State.

Ambode, who spoke when he received the One-Day Governor of the State, Miss Zuffon Bukola and members of her cabinet at the Exco Chambers, Lagos House in Ikeja, Lagos, Southwest Nigeria said that the emergence of Miss Zuffon and the One-Day Deputy Governor, Miss Rosemary Ogidan was a signpost to what the future portends for the State.

Zuffon, a 16 year-old SS 2 student of Awodiora Senior Secondary School, Ajegunle emerged the One-Day Governor of the State after she emerged winner at a keenly contested Spelling Bee Competition in June 2017, while Ogidan, also an SS 2 student of Methodist Senior High School, Badagry finished as runner up.

He said: “This is a significant day for Lagos State and it also signals what the future actually holds for Lagos State in which we have seated here, two female strong members of the new State Executive Council and we have a female Governor and a female Deputy Governor.

“It is also telling us a story about what the future of Lagos is all about that one day we would find seated here, not just a day governor, but for a period or tenure of four years, there would be a female Governor in this State.

“We’ve had female Deputy Governors in this State; it also says something that these younger ones are telling our women in Lagos to rise up and actually take their position.”

He said the state government was encouraged by the exploits of past One Day Governors and their cabinet members who were excelling in their various endeavours, just as he commended parents of the students as well as the school management for all the efforts put into bringing out the best in them.

Ambode also commended Zuffon and her cabinet members, noting that their feat was an indication that the funds expended by the State Government to improve the educational sector was not in vain, adding that efforts would be intensified to further develop the sector.

“I want to congratulate her and her cabinet members for also showing to us that the future of education in Lagos is strong. We believe that the resources we are spending in the educational sector are not going to be a waste and they have also shown that they are ready to succeed us as long as we encourage them.

“So we’ll do everything just like what we have been doing in the last two years to continue to pay greater attention to education and also make sure that we do so much in youth development to allow them to be mentally capable of succeeding us even as we move away from all the things we have done in the public service,” the governor said.

In order to encourage their efforts, Ambode awarded full scholarship to the One Day Governor, Miss Zuffon and her Deputy, Miss Ogidan while also announcing a cash donation of N1 million each to them.

The governor also awarded a cash donation of N500, 000 each to members of the One Day Governor’s cabinet consisting of Master Tovishede Ayobami (Secretary to the State Government); Master Philip Daniel (Speaker of the House of Assembly); Master Durojaiye Oluwasegun (Commissioner for Education); Master Atabo Ufedojo (Commissioner for Science and Technology).

Earlier, Miss Zuffon while addressing Ambode and members of the State Executive Council commended the governor for his visionary leadership and numerous achievements, especially in the educational sector, saying that despite the economic challenges, teachers’ salaries and entitlements were being paid as at when due.

Zuffon, who is aspiring to become a lawyer, also seized the occasion to request for a School Bus, renovation of the school’s multipurpose hall as well as construction of drainage channels in her school, which Ambode expressly granted.

In a related development, wife of the Governor, Mrs. Bolanle Ambode who received Zuffon and her cabinet members congratulated them for emerging winners in the various categories of the keenly contested competition and for doing their families, schools and local governments proud.

She charged them to remain focused and study harder to actualize their dreams, praying that God would take them to higher positions in life.

The wife of the governor commended the initiator of the Spelling Bee Competition, Senator Oluremi Tinubu and the organizers for their steadfastness since inception of the competition 17 years ago.