Sagay: Don't address Nigerian senators as 'Distinguished', they have no honour 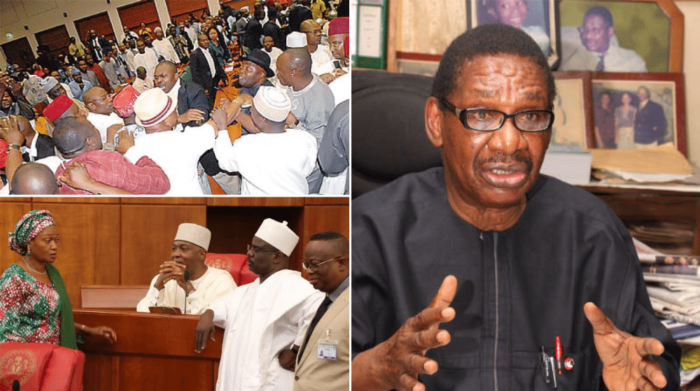 Chairman, Presidential Advisory Committee Against Corruption, PACAC, Prof.Itse Sagay on Thursday said Nigerian senators have abused and bastardised the word ‘Distinguished’ which they are being called, challenging Nigerians not to call them by such name.

Sagay said there was nothing distinguished about the senators as they have no honour, value and integrity.

Speaking at the Hallmarks of Labour Foundation Re-union in Lagos, on Thursday, Sagay stated that the nation had failed utilise the natural resources they were blessed with, as the political elite had worsen the problems.

In his words: “Our current ruling class, particularly the Senate has no value, no honour, no vision, no integrity, no compassion for the sufferings of fellow Nigerians. The attachment of ‘Distinguished’ to their name is a horrible bastardization and gross abuse of that term. Now, I reject it with contempt when anyone addresses me with that unfortunate term.”

He also called for total restructuring of the country, saying that it was a known fact that some governors spent more time in Abuja than in their respective states, saying that at the end  of every month, the 36 commissioners of all the states of the federation would assemble in a class room in Abuja presided over by the Federal Minister of Finance to share money in the Federation Account based on a formula no one really understood.

“This money comes from three major sources, oil money from Niger Delta, duty collection and VAT from Lagos State. After sharing, the commissioners will head back to their respective governors for allocation sharing based on what they consider priorities and wait for the next monthly allocation. It is inconceivable for any state to grow with this type of structure that puts state on welfare benefits,” he lamented.

According to Sagay, the plight of northern population were completely self-inflicting as the elite and ruler in the region continued to suppress their own populations, saying that all the Local Governments Areas received federal allocation and with 419 LGA in northern part as against 355 southern and 19 northern state as against 17 southern state, as the bulk of national fund went to the north.

“So why is more poverty in the North than South?” He asked.

Also speaking, former Secretary General, Commonwealth, Chukwuemeka Anyaoku decried that the nation had never been so divided like what was being witnessed currently, blaming it on lack of knowledge by younger generation.

According to him, the most regrettable aspect of it all was that history was no longer taught in schools which meant that the younger generations were growing up unaware of the society values that existed earlier in this country, saying that they were growing up  not knowing the differences in ethnicity and religious in Nigeria.