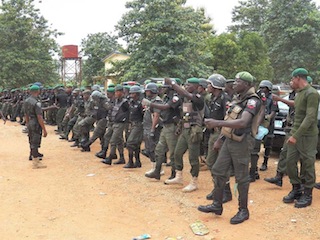 The Inspector-General of Police (I-G), Ibrahim Idris, has deployed over 500 Police Mobile Force men to Aba to restore peace in the troubled city.

The Assistant Inspector-General of Police (AIG) Operations, Taiwo Lakanu, disclosed this on Friday during a duty tour to Aba, at the Aba Police Area Command.

He said that the I-G directed that peace should be restored to Abia, hence the deployment of the mobile policemen who had assumed duty in Aba.

“You can see that we have emplaced security and that the whole place is quiet and our men are on patrol.

“For now we are still monitoring. So, for now there is no problem. We are on top of the situation. We are working in tandem with other agencies and they are cooperating with us,” he said.

Peace is gradually returning to the commercial city which was embroiled in a clash between soldiers and IPOB members in Aba.

Some roadside shops along Aba-Owerri road, St Michael’s road and other streets, and those at Ariaria International Market and New Market opened on Friday.